No search warrant is needed but uniformed cops must be present during searches. 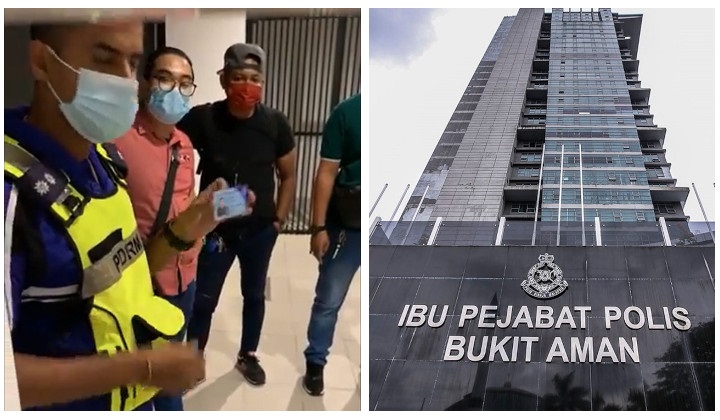 After a video went viral recently of plain clothes policemen allegedly trying to enter a woman’s home late at night, Bukit Aman has issued a directive that plain clothes personnel making visits for investigation or searches must be accompanied by uniformed police personnel to prevent impersonations.

The incident which happened on Monday 12 July, was recorded in a Facebook live stream from the perspective of the woman behind her closed grille door.

The 33-minute video shows at least 7 men dressed in casual clothes with only one wearing a yellow “PDRM” vest.

The woman tells the men she is afraid to open the door and doesn’t believe they are who they say they are. They tell her to call 999 for confirmation but the woman says that won’t be enough as they did not have a search warrant either. She then calls for her Facebook friends to help and to share the video.

Although not captured on video, the Star reports the woman did eventually cooperate and if she had not, action under Section 186 of the Penal Code could have been taken against her for obstructing a civil servant from carrying out his duty.

So, the police can enter without a search warrant?

In the directive issued today, Federal CID Director Comm Datuk Seri Abd Jalil Hassan said that in searches, all police personnel with the rank of Inspector or higher do not need to furnish a warrant to conduct a search.

Lawyer Kitson Foong of Kit & Associates added saying that police could enter the premises of a subject under investigation for a seizable offence once they had identified themselves and the reason for their visit.

A “seizable offence”, is one where a police officer ordinarily arrests without a warrant according to the third column of the first schedule of the Criminal Procedure Code of which these offences are punishable by death or imprisonment for three or more years.

In the case of the Facebook live video, they were there in search of a male suspect to help with investigations into a cheating case related to the Ops Pelican probe.

READ MORE: “Datuk Seri” On The Run With Bags Of Cash, Was Last Seen In Puchong

You have the right to decide, but also you don’t

Aside from the “seizable offences” mentioned above and situations like countering terrorism, the police would normally need a warrant to conduct their investigations and convince a judge from the Magistrates’ court that they must progress further.

According to Asklegal.my, a search warrant would be needed for: