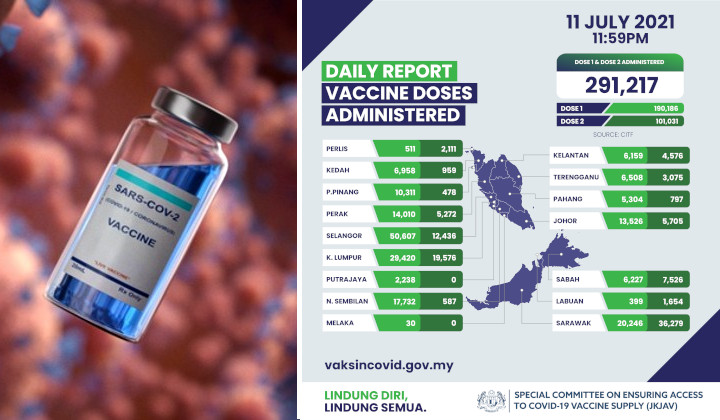 Over the past week, the National Covid-19 Immunisation Program (PICK) hit some of its key milestones. More than 10% of Malaysians have been vaccinated and over 300,000 vaccinations were administered each day.

Reaching the 10% vaccination rate is one of the conditions needed for the country to enter Phase 2 of the National Recovery Plan (NRP). As of 9 July, 7 states: Kelantan, Terengganu, Pahang, Perak, Perlis, Penang, and Sabah, have entered Phase 2.

This is due, in no small part, to the over 300,000 vaccinations administered per day since 5 July.

It’s reported that Malaysia’s high vaccination rate was higher than many other countries including the United Kingdom based on doses administered per 100 people.

However, PICK couldn’t maintain the numbers as 291,217 doses were administered on 11 July.

At the same time, Putrajaya, which already had 29.3% of its population vaccinated, has recorded no second dose shots for two days in a row.

Melaka, which has 10% of its population vaccinated, saw only 30 first doses being administered and no second doses.

Meanwhile, Selangor and Kuala Lumpur, which has constantly hit the highest number of daily new infections, have 7.6% and 20.2% of their population fully vaccinated, respectively.

They both also show the highest number of first doses administered nationwide and their second dose numbers were only beaten by Sarawak with 36,279 doses, which is more than the two combined.