Academics argue that trolling can be use as a positive tool for social discourse. 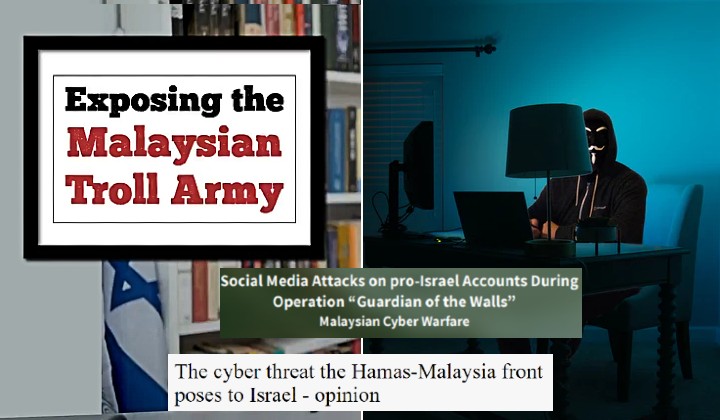 Read More: The Definition of Apartheid And The Context Of Israel

The report details how netizens had orchestrated a “massive attack on mainstream social media and messaging platforms against Israelis and pro-Israelis” by spamming or trolling pro-Israeli content as well as getting pro-Israeli social media accounts blocked or suspended during the 2021 Israeli–Palestinian conflict which took place in May.

Culminating in the death of over 250 Palestinian as well as more than a dozen Israelies, the crisis – which the Israel Defence Force (IDF) dubbed “Operation Guardian of the Walls” – had propped up waves of pro-Palestinian support from across the globe as people went online and on to the streets in demonstration against violence and for a free Palestine.

According to the ITIC, online protests in Malaysia were led by a network of local anti-Israel groups who designed and spread meticulous content to target Israelis and pro-Israelis, including government officials and celebrities.

The ITIC also revealed that a group of Malaysian ‘hacktivists’ had apparently leaked a list of Israeli phone numbers which were then used to harass and block its users.

Roughly translating to mean Israelis are “torn up” or “emotionally compromised”, the hashtag was noted to have been mentioned over 557,000 times and reached around 251 million users on Twitter.

The report noted that the campaign was done by real Malaysian social media users and accounts with little to no indication of the protests being perpetrated by online bots or paid comment services.

The ITIC classifies the movement as a threat to freedom of expression and that the campaign was an indication of a large anti-Israeli network operating in Malaysia.

The massive and aggressive attacks against pro-Israel accounts during the operation in Gaza demonstrates the power of the anti-Israeli Muslims on the web. These attacks damaged the ability of free expression of many thousands of Israelis and pro-Israelis that wanted to share their legitimate feelings and views on the situation in Israel during the operation, without any intent of violence or racism.

In an article published by The Jerusalem Post as well as a three-minute video posted online, pro-Israeli columnist Emily Schrader cited the report by ITIC in criticism toward Malaysians for systematically harassing and cyberbullying pro-Israeli netizens.

Social media networks are failing when it comes to combating targeted harassment.
pic.twitter.com/JXiJyetrLc

Emily, who herself had been a target of #IsraelKoyak protesters, accused Malaysians of inciting anti-Semitic violence and breaking social media ethics.

Her opinion piece also noted that Malaysian were working together and are “good friends” with the Hamas militants in Gaza.

Guys, I’ve officially made it in Malaysia. I’ve even got a fake anti-Israel bigot account insulting me! @IdoDaniel how can you compete with this? Koyak? 😂 😂 pic.twitter.com/hP55BY5Hm3

In response to the stream of reports, Malaysians again crowd the internet to share their disapproval of Israel.

Sentiments online reveal that netizens were more than proud of the attention they had received and garnered in order to focus global attention on the issue of Palestine.

You wanna know something? We take that as compliment. Thank you. #IsraelKoyak https://t.co/HCPnrKbCkZ

Malaysia solidarity and support on Palestinians issues is not antisemitic . We’re anti terrorisme , zionisme , genocides, apartheid, and ethnic cleansing . We will raise up our voices to the whole world . Israel is not a state !! #israelkoyak #SavePalestine #justices https://t.co/Z36XhsXB3D

Though internet trolls have been characterised as deviant and destructive in nature, experts have concluded that ‘trolling’ can be used as a powerful medium to draw attention to social problems and rally support towards marginalised groups.

Trolling behaviours are known to be varying in context, tactics, motivations, as well as its impact on public opinion.

Observers have noted a rise in the use of trolling within the context of online activism since the early 2010s as movements such as the Arab Spring, MeToo, Black Lives Matter (BLM) as well as other political and social-driven protests took off all over the world.

Some argue that the use of trolling, satire, and parody content within social media discourse serves a purpose to disrupt or create chaos in order to provoke a response – becoming a common tool used by the public as well as governments and organisations to perpetuate an agenda.

Even the Israeli military has been recognised for using familiar social media content and online trends such as TikTok videos to further their propaganda.