A tale of two cities, each impacted by lockdown regulations in very different ways. 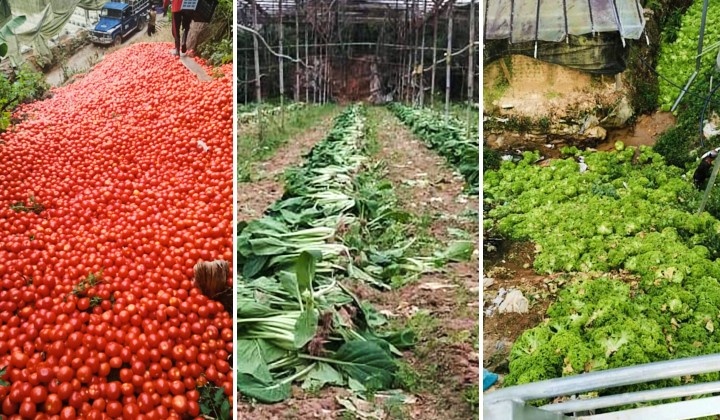 Farmers here may have hundreds of miles of fertile land, but they could not reap the harvest of late.

During the recent Enhanced Movement Control Order (EMCO) in Kampung Raja and Tringkap, which restricted movement, they had to dump their vegetables.

In Tringkap alone, it was estimated that around 100 tonnes of farm produce were thrown away each day.

Assuming vegetable prices were at their lowest, it would have easily amounted to more than RM200,000.

Everyone could only watch helplessly as the farmers lost their wits for more than two weeks with no room for manoeuvring.

“In these pandemic times, food is precious, and city folks need it even more so, but we are forced to throw it away.

“We are not even allowed to give away the vegetables to the needy,” said Low, a farmer with more than 20 years of experience.

For him, the lockdown measures were reckless and put the entire farming community in peril.

Low argued the same standard operating procedures (SOP) for factories could not be applied for agriculture.

Producing vegetables requires a significant amount of time, not just by turning on a switch. Most crops need an average of two months to harvest.

Vegetable distributor Chloe Cheng agreed that not all lockdown measures were absolutely necessary.

“The authorities could have let those who tested negative tend to the farms and send out the harvest.

“Everyone has been affected by the pandemic, and farm produce are essential to revive the economy.

“This line of reasoning should have been clear to the authorities,” she said.

Despite the restrictions and a very recent raid against foreign farmworkers in Tringkap by the Immigration Department, he is convinced they had no improper intent.

Wong even acknowledged that the authorities had tried their best to accommodate the farmers while having their eyes fixed on the big picture at all times.

“The farmers never hesitated to comply with the SOP.

“But they are really in danger of being overrun by financial ruin, which made them very anxious with the implementation,” said Wong, a farmer himself.

The EMCO for Tringkap ended on Sunday (11 July). The announcement is like storm clouds after a long drought for the farmers.

“Hopefully, there will be no more surprise so we can have a bright future before us,” said Yap, who dumped at least RM30,000 worth of vegetables these past two weeks.

The farmers lost out on a golden opportunity as the prices of vegetables are considerably reasonable recently.

For example, the consumer price for Japanese cucumbers is RM6 per kg compared to under RM2 when prices are low.

Tomatoes currently sell for RM5 per kg in the Klang Valley as opposed to just over RM1 at the other end.