Protesters say the PN government has not come up with a viable plan to save Malaysia from the Covid-19 pandemic despite rising unemployment and job losses. 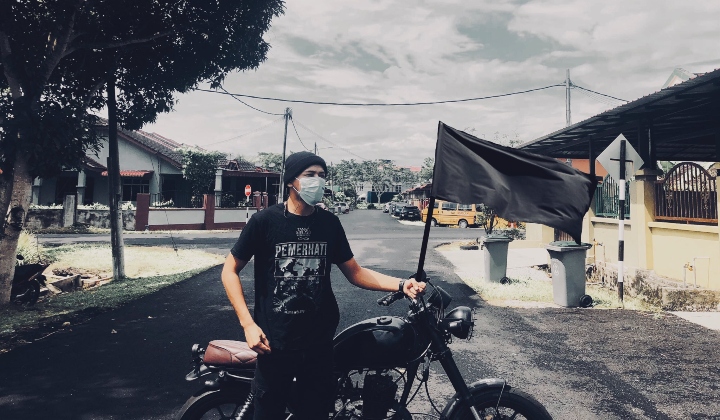 Social media is a buzz today with the hashtags #BenderaHitam #Lawan and #KerajaanGagal, as netizens are taking to online platforms to demonstrate their dissatisfaction with the Malaysian government.

The Sekretariat Solidariti Rakyat (SSR) has called on the public to wave black flags on Saturday, 3 July as a show of protest against the Perikatan Nasional government.

We r not being rude
We r not defying the law
We just tired being in a country whre the government is not efficient, arrogant & prioritise their position more than the people’s life.#benderahitam#Lawan pic.twitter.com/QMiDfdLE73

SSR said those who want to join the protest should wave flags at their homes, businesses, streets, or anywhere appropriate and post pictures of it on social media at 3pm with the hashtag #lawan.

The protest has three demands:

2. For Parliament to convene immediately,

3. For the state of emergency to end.

This act (of waving a black flag) is a message to the government that the people are sick and tired of the uncertain solution for the people’s and the country’s problems. This act is also the start for other acts should Muhyiddin fail to resign.

Malaysians, raise the black flag! 🏴
It’s time for us to fight.#LAWAN pic.twitter.com/SPr4Jyl7vU

SSR claims the PN government has not come up with a viable plan to save Malaysia from the Covid-19 pandemic despite rising unemployment and job losses.

The group cited the white flag campaign as an example of how desperate people have become and said the government’s economic assistance has been “unacceptably” slow.

The #BenderaPutih campaign calls on those who are desperately in need of assistance to put up white flags outside their homes as a signal that they need urgent help with regard to food and basic necessities.

The Royal Malaysian Police (PDRM) has confirmed that it has opened an investigation into the black flag waving campaign which was advertised through social media sites over the past few days.

Director of the Criminal Investigation Department (Bukit Aman), Datuk Seri Abd. Jalil Hassan said that he was aware of the existence of the campaign and informed that an investigation had been opened.

“So far we have not called any individual to testify as it is still new and the police are tracking down those involved in this campaign,” he told Kosmo!