A tigress has been said to be training her cubs to hunt leaving dead but uneaten cows. 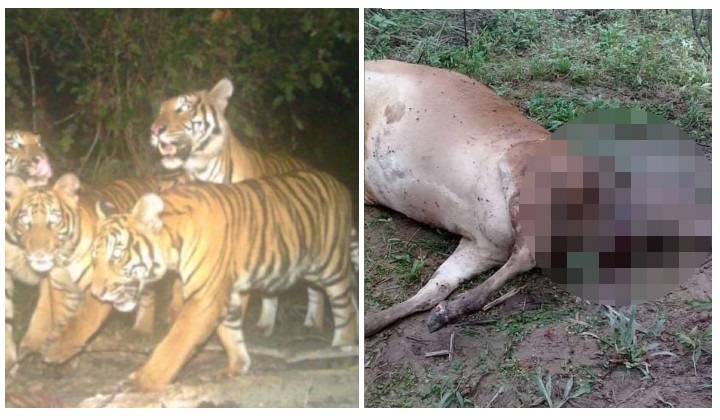 Terengganu State Agriculture, Agro-based Industry and Rural Development Committee chairman Dr Azman Ibrahim posted a series of photos on his social media of cows that were killed but not eaten.

The plausible reason for this he said was due to tigers training for a hunt.

A family of Malayan tigers were recently spotted roaming freely at a Felda palm oil plantation in Dungun, Terengganu.

The tigress with her 4 cubs, said to be about 2 years old, were caught on an infrared camera by the Wildlife and National Parks Department (Perhilitan) at Ladang Felda Kerteh 4.

Training her cubs to hunt

In a report by the Malay daily newspaper Sinar Harian, Dr Azman said that based on the picture, they believe that the female was training her cubs to hunt because the cows were killed but not eaten.

The tigress is also believed to be behind the attacks on livestock in the area with the last known attack on 14 June.

Felda settlers are given a 6 pm curfew

About 240 cows owned by Felda settlers have been killed since tigers began appearing in the area in 2019.

Dr Azman said, “It is fortunate that only livestock has been eaten so far”.

24-hour surveillance is being conducted in the area by the Terengganu Perhilitan and in addition to the curfew, Felda settlers are also advised to keep their cows inside secure pens and for the public to not visit the picnic area at a waterfall nearby.

Why must we save them?

Malayan tigers keep populations of prey species in check, which in turn maintains the balance in the ecosystem. Not only is this balance important for wildlife, but people too.

Their habitat is natural forest, which we as humans also rely on whether directly for our livelihoods or indirectly for food.

The effects of climate change are also affecting the natural forests which provide fresh water, clean air and regulate the climate to limit extreme weather such as droughts and storms.

Poaching however is the most urgent threat to the tiger’s survival in the wild.

We have already lost one earlier this year to poachers who shot at it eight times.

By protecting our beloved tigers, we are also safeguarding the quality of our own lives now and in the future.

Less than 200 left in the wild today

The International Union for Conservation of Nature (IUCN) Red List of Threatened Species has now classified our Malayan tigers to ‘Critically Endangered’ and faces an extremely high chance of extinction in the wild.