The delta variant of Covid-19 may have pushed the country to step up the second doses. 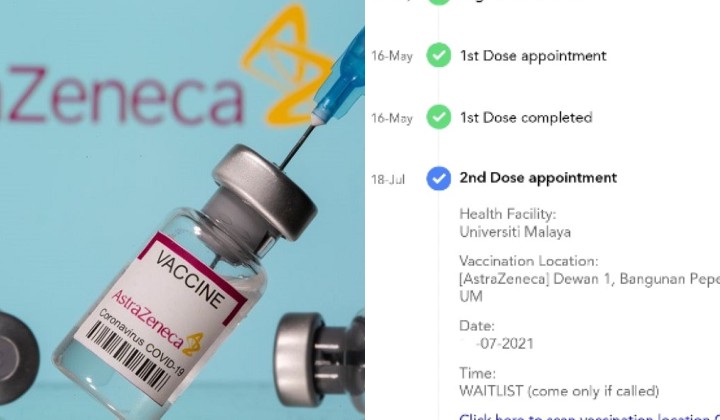 Those who have previously registered for the AstraZeneca vaccine can now expect their second dose soon.

Currently, there doesn’t seem to be a push notification on the MySejahtera app, but those eligible should receive an SMS.

You can also check your MySejahtera app directly. It should be updated to reflect the appointment of your second dose. Remember to click on the appointment link to confirm your time.

Why the earlier dose?

There has not been an official reason given by either JKJAV or the National Covid-19 Immunisation Programme Coordinating Minister Khairy Jamaluddin, who only mentioned that this decision was made on the recommendation of the Technical Working Group using donations from the Japanese government.

The dosing interval for the AstraZeneca vaccine has been shortened to 9 weeks from 12 weeks. pic.twitter.com/Lhgf44WtM1

However, it is suggested that this decision follows those in other countries, which have found that double-dose of the vaccine proved more effective against variants of Covid-19.

The Delta variant, which is 3 times more infectious than the original Wuhan strain, is already making its round in the country. As such, this is likely a preventive measure to ensure that the vaccinated groups stay safe.

The original schedule of 12 weeks bewteen the two AstraZeneca doses would allow more people to at least receive their first dose in the same time frame, essentially creating a larger pool of people with at least some form of protection.

Additionally, previous studies note that a 12-week gap resulted in an 82.4% efficacy versus a 9-11 week gap, which resulted in a 63.7% efficacy rate.

However, the emergence of the Delta variant likely pushed the trade off between a slightly higher efficacy rate versus protection against a more infectious strain.

The second dose will also be the AstraZeneca vaccine. Despite reports from other countries which note that a mixture of vaccines tend to result in better efficacy, JKJAV has noted that for the first batch of AZ vaccine-getters, they will receive the second dose of AZ without an option to get other vaccines.

You will get the same vaccine for second dose.