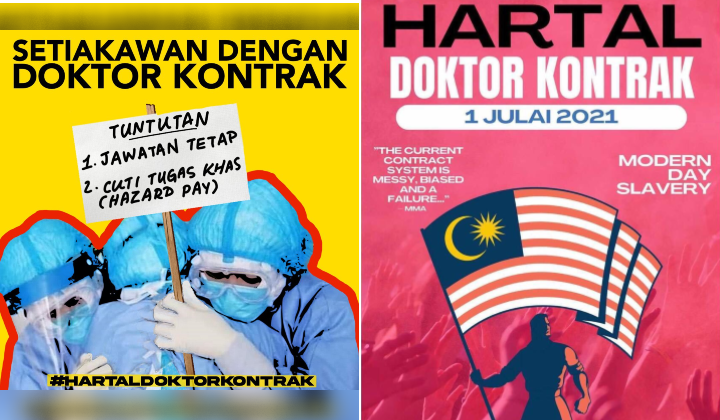 A movement calling for Malaysian doctors to go on strike is gaining traction online under the hashtag ‘#HartalDoktorKontrak’, in solidarity for the plight of doctors who work on contractual basis for public hospitals across the country.

The protest, which would culminate in a mass work strike set to take place on 26 July, was reportedly organized by a group of doctors from both the public and private sector demanding for policy changes from the government.

Primarily, the problem stems from contract doctors not being given equal opportunities and fair compensation for their work in the civil service.

More than 15,000 contract doctors are expected to walk out of work nationwide on the day of protest.

In 2016, the Health Ministry (KKM) introduced a contract system to place Malaysian medical, dental, and pharmacy graduates in housemanships positions at government healthcare facilities across the country.

Housemanships is basically a compulsory internship for doctors in Malaysia – amounting to a minimum period of two years.

In order to complete a medical degree, med students are required to undergo a period of pre-clinical training during which they study the theory of medicine before moving on to the second phase of clinical training or housemanship.

Once they have done all that, only then is a doctor qualified to be a medical officer (MO) registered under the Malaysian Medical Council (MMC).

However, registered MOs in Malaysia are also required to undergo two years of compulsory public service at clinics and hospitals under KKM before they can work anywhere else or move to continue with their studies.

The contract system applied by the government was explained to be a temporary measure on solving the problem with having too many medical grads in Malaysia and not having anywhere for them to go.

But that is not to say that there are too many doctors in Malaysia.

In 2018, KKM revealed that the country faced a critical shortage of healthcare professionals across all sectors as there were only about 3.4 clinical specialists for every 10,000 people nationwide.

This number is significantly lower than that of the average 14.3 specialists to 10,000 population recommended by the Organisation for Economic Cooperation and Development (OECD).

MOs with the UD41 title maintain a similar salary scheme with their junior housemans minus a RM600 monthly allowance given to doctors in training.

UD41 MOs also reportedly make about RM8,000 less annually than their UD43/44 colleagues for the same level and amount of work.

Contract MOs are also not entitled to receive unrecorded leaves and are not eligible for the government’s Hadiah Latihan Persekutuan (HLP) scholarship program where doctors can pursue to become specialists.

A contract MO can still choose to further their studies in order to attain a specialization, but they must do so on their own time and with their own funds.

This system is interpreted to be detrimental for contracted civil service doctors as it offers them little to no job security as well as fewer opportunities for them to further their careers.

Reports in 2020 highlighted that close to 4,000 MOs contracted in the civil service were expected to expire by May 2022, leaving their employment futures uncertain.

Health Minister Datuk Seri Dr Adham Baba had explained that since 2015 the government had enforced a recruitment policy that no longer allows for new job positions to be created in the civil service and only existing vacancies can be filled.

This he said was also why the contract system had been implemented and that the scheme only promotes MOs to permanent positions based on merit.

Those who fail to acquire a permanent posting are told to seek employment in the private sector.

Between December 2016 and May 2021 a total of 23,077 UD41 contract MOs were reportedly appointed under KKM and out of that number, 789 received permanent placements.

With the advent of the Covid-19 pandemic, there had been numerous calls for the government to absorb contract MOs into the public service as members of its permanent staff along with providing them with the benefits that come along with the position.

This is especially so considering how KKM had revealed that over 50% of its medical personnel are feeling burnt out – suffering from physical and mental exhaustion while on duty during the course of the pandemic.

Since then, the government has promised to further extend the contracts for MOs as well as plans to promote contract doctors to permanent positions.

With threats of a strike now looming, Finance Minister Tengku Datuk Seri Zafrul Abdul Aziz has also been seen in the headlines promising to find an immediate solution for the issue.

Despite sentiments online showing massive support for the solidarity movement, stakeholders within the national healthcare system are asking doctors not to walk out on their jobs.

Apparently there have been reports that a public hospital in Terengganu was issuing memos to their staff threatening disciplinary actions against those who involved themselves with the protest. KKM however later came out to deny these claims.

The Malaysian Medical Association (MMA) Section Concerning House Officers, Medical Officers, and Specialists (SCHOMOS) meanwhile want to distance themselves from the #HartalKontrakDoktor and are calling for the issue to be resolved through negotiations and less dramatic actions.

Both the MMA and SCHOMOS rejected the idea of organizing a strike during the pandemic and proposed their own ‘day of solidarity’ instead.

The separate ‘Black Monday’ project calls for supporters to blacken their social media profiles on 12 July and demands from the government to;

Supporters of Black Monday say that it was wrong for doctors to simply abandon and walk out on their duties during such times as the pandemic.

The same was mentioned by the Congress of Unions of Employees in the Public and Civil Services (CUEPASC) saying that a strike would disrupt the nation’s healthcare system.

CUEPASC requests for the government to find ways to resolve the matter and ensure doctors have better employment security and a finer career development path.

As of writing, there have been no formal response from KKM on the upcoming protests.