The aid given totalled to less than RM30 per box at retail price. 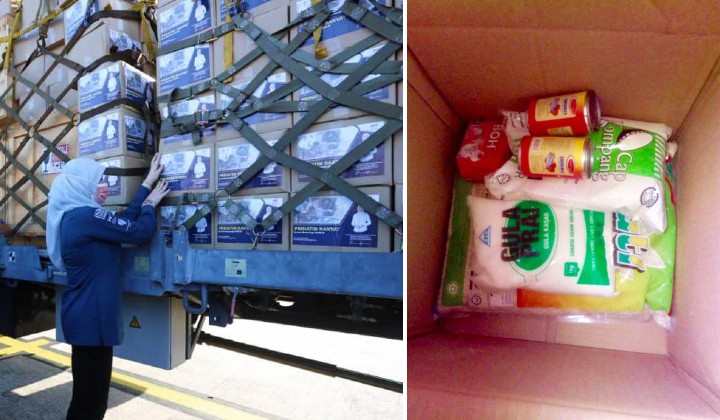 According to Bernama, a total of 2,500 food aid boxes were flown in to Labuan on Thursday, 24 June 2021, under the supervision of Rina, after the area was put under the Emergency Movement Control Order (EMCO). Another 11,500 boxes will be shipped by sea, bringing the total food aid baskets to 14,000.

Bernama also reported that her ministry will be coordinating the distribution of other essential items such as baby diapers, baby milk powder, and others with NGOS. The food aid boxes were delivered by air via the Royal Malaysian Air Force.

Labuan is not the only place where food aid boxes has been distributed by the ministry, although beneficiaries at other areas have lamented the actual food aid provided.

However nicely she posed with boxes plastered with giant stickers of her face on the outside, netizens were shocked when photos showed they were full of food… for thought.

Pictures from other food aid donations by Rina Harun’s ministry showed a disappointing lack of proper food, such as this picture provided by a resident in PPR Desa Rejeng in KL, who received his box just earlier this week on the 20th of June.

PPR usually not a small family. Minimum 5 in a family. And you have just these? pic.twitter.com/BUr2evmtIT

Despite the size of the box, the aid only included 1 bag of 5kg rice, two cans of sardine, flour, sugar, and a box of tea. A rough estimate by netizens found that the cost of food within the box only totalled up to less than RM30 at retail price.

Additionally, many other netizens critisized that the food could barely be enough to feed a typical B40 family in the low-cost housing, as they have on average at least 2 adults and 3 children.

It doesn’t take a genius to figure out that the food aid will only be able to provide two incomplete meals or less for a family, and that would only be canned sardines with rice.

Ironically, the food aid box does not follow Malaysia’s latest food pyramid, updated in 2020, which places fresh fruits and vegetables at the bottom of the food pyramid– meaning that it should be the biggest part of your diet.

Mounting Criticism Over Handling Of Bella, Rina Harun Insists Her Ministry Did What They Could