This time students and teachers pitched in to get a replacement 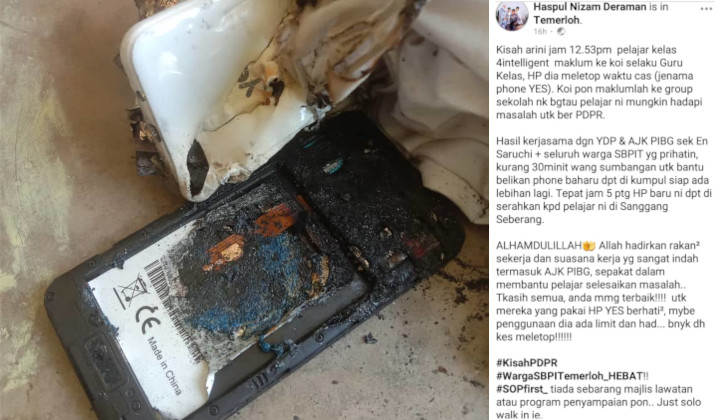 YTL Communications said it was a rare incident but another lithium ion battery pack in a YES Altitude 3 smartphone given out as a part of the Jaringan Prihatin Programme burst into flames.

The first incident was reported in Gombak when a 9-year-old boy was using his YES Altitude 3 for his online classes. According to a statement by YTL Communications to Malay Mail, the phone involved in the incident was still functional after the battery was replaced.

The second incident happened in Temerloh. The phone was said to have been left charging using an older third-party charging cable after a two hour online class and left inside a shirt pocket that was hanging on the wall.

YTL Communications confirmed that the batteries in the phones involved in the two incidents were fully compliant with all the pertinent international health and safety certifications including CE (Conformitè Europëenne).

While the boy in the first incident was gifted a Redmi Note 10 by Xiaomi, the teachers and the community got together and bought the girl in the second incident a Vivo Y12s smartphone.

The boy in the first incident was also given a replacement YES Altitude 4, an upgrade, by YTL Communications, but after what happened his aunt noted that they are afraid to use the device.