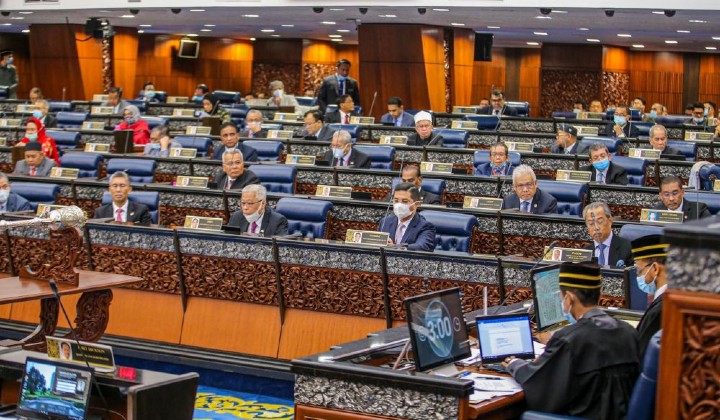 After the Malay rulers met yesterday and the Agong recommending that Parliament should convene as soon as possible, politicians from both sides of the divide are chiming on to give their reactions on the issue.

In a press conference yesterday, Law Minister Datuk Seri Takiyuddin Hassan said that the Parliament will reconvene soon but added that the Agong didn’t specify the exact date to open the Dewan.

His Majesty did not say which month (Parliament) should be held, just that it should be soon. The prime minister (Muhyiddin Yassin) has said that Parliament will re-open in September or October.

He also touched on having an online session but said that a study should be conducted first as there are many aspects that the Parliament administration has to consider.

Dewan Rakyat Speaker Datuk Azhar Azizan Harun said the that government’s plan to reconvene in September was acceptable and added that it’s not too late to address Malaysia’s multiple crises.

It’s reported by the Malay Mail that the last Parliament session was held on 14 December, last year, and was suspended from 12 January onwards due to the Emergency.

The prime minister has the authority to set a date to convene Parliament with the consent of the Yang di-Pertuan Agong. He is authorised to call for a sitting according to the Constitution, where, in fact, he has stated rationally as to why that timeline is appropriate. Among the reasons is because Covid-19 numbers and such, so as for Parliament, we will wait for a date to be set later.

Opposition leaders want it to be open ASAP

Pakatan Harapan’s Presidential Council came out with a statement recently urging Parliament to reconvene after the recommendation was made by the Agong.

The Council said that the failure to do this would cast doubts on the Federal Administration’s ability to continue leading the nation, Malay Mail reported.

They added that the Dewan must reconvene so that it could serve as a check-and-balance to the Federal Administration and for Members to discuss matters such as the Emergency Ordinances, the National Recovery Plan, and government spending to ensure these had Malaysians’ interest in mind.

Former Prime Minister Datuk Seri Najib Razak also took shots at the Law Minister, who claimed that the Emergency was a success in handling Covid-19.

He also included a graph which indicates the increase in cases after the Emergency, saying that the brave statement made by the Minister contradicts the scientific data and recommendations made by the Agong along with the Malay rulers.

Prime Minister Tan Sri Muhyiddin has responded to the Agong’s recommendations and said that the government have taken note of the views of His Majesty.

In a statement that was posted on social media, he said that he informed and advised Yang-Dipertuan Agong on the Covid-19 pandemic management, enforcement of the Emergency Ordinances, implementation of the National COVID-19 Immunization Program, economic stimulus packages and financial assistances, implementation of the Parliamentary session, the National Rehabilitation Plan and other related matters.

Upholding the views of His Majesty the Yang di-Pertuan Agong, the government will take follow-up measures based on the Federal Constitution and national laws.