The Simpang Pulai-Lojing route, which passes through Kampung Raja, is reopened for agricultural transportation, allowing for a substantial amount of vegetable produce to reach consumers. 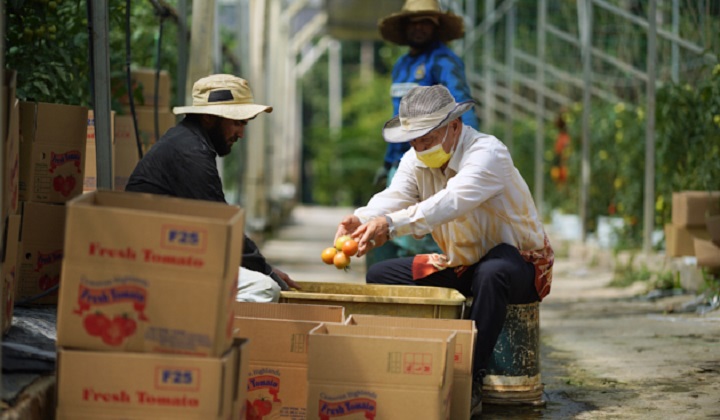 Kampung Raja in Cameron Highlands is an essential centre for distributing and transporting vegetables to the rest of Malaysia and Singapore.

However, following an enhanced movement control order (EMCO) there, authorities closed off all the roads, and vegetable prices spiked by around 40 percent.

Now though, farmers in Cameron Highlands and consumers can breathe a sigh of relief as the route between Simpang Pulai (the main entry point to Cameron Highlands) and Lojing (located in the Gua Musang constituency of Kelantan) has been reopened to transport agricultural produce.

The Lojing highlands are essential as there are over 2,000 hectares of farmland.

Cameron Highlands’ daily agricultural output is more than 500 metric tonnes, with half of it coming from Lojing.

“The reopening of the route Simpang Pulai-Lojing route is a lifeline during this challenging period.

“Now, the vegetables that would have been wasted will now be available to consumers across the country. At the same time, farmers can reduce their financial losses,” he said.

He cautioned that vegetable prices will not drop immediately but will stabilise at the very least.

Meanwhile, concerns remain that farming activities are still not allowed in Kampung Raja during the EMCO.

Cameron Highlands Vegetable Transport Association chairman Lau Sai Hoong said this is inevitable as saving lives by flattening out the pandemic is critical.

However, the situation is not all that bad as farming is still allowed in Lojing, which is part of Kelantan.

“For all practical purposes, Lojing is a continuation of Cameron Highlands.

“In simple economics and maths terms, the reopening of the Simpang Pulai-Lojing route will buffer the impact on Cameron Highland’s agricultural economy and consumers’ pockets during the EMCO,” he said.

It is understood that authorities would wait for further swab tests among farmers and their workers – and consider the impact of allowing them to work – before committing to any resumption of agricultural activities in Kampung Raja.

Local assemblyman Chiong Yoke Kong opined that if zero cases are recorded for five consecutive days, an early lifting of the ECMO could be on the cards.

“This the first EMCO directly impacted the agriculture industry, which is an essential sector.”

Chiong also suggested that workers who stay on the farms can maintain the crops, such as watering, as long as there is no movement in and out of the land.

“Farms are unlike factories where the production lines can be switched off and turned on anytime. If the farms are left idle for three days, 70 to 80 percent of the vegetables will start to rot.

“Farmers would need to re-plant, and it would be another two to three months before they reap the harvest,” he said.

Lockdowns Are No Longer The Solution – PM Ismail Sabri