The baby girl and her mother are safe and healthy. 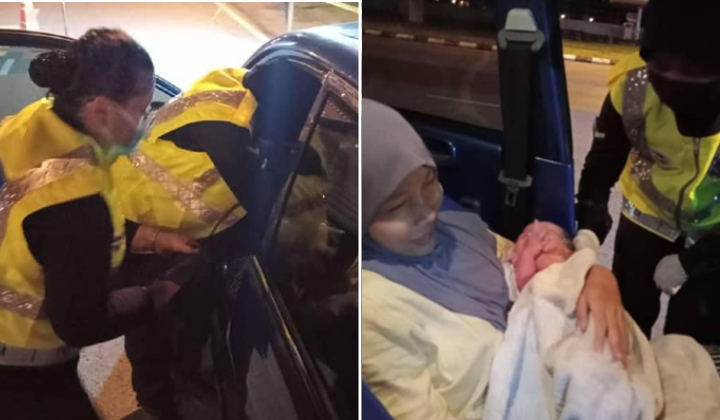 A woman in Samarahan, Kuching managed to safely give birth to a baby girl in a car with the help of two female police officers from the Kota Samarahan District Police Headquarters (IPD).

They were on duty to guard a roadblock located at the Kuching – Samarahan Expressway, when the incident happened.

As reported by Harian Metro, the incident happened at 11.50pm, when the 26-year-old woman from Kampung Semera Ulu, Asajaya along with her 28-year-old husband were caught in the traffic before the roadblock while on their way to Sarawak General Hospital.

Lance Corporal Noor Fatihah Azelam, 27, was quoted saying she was on duty to man the roadblock from 4pm to 12 midnight but rushed to help after being informed by a man that his wife wanted to give birth.

After approaching the car, I saw that the woman had given birth and I helped untie the umbilical cord that was wrapped around the baby’s neck.

She also said that her colleague, Corporal Perakson Jennie, 40, was also present, and was the one who covered the baby with a towel.

Meanwhile, Samarahan District Police Chief, Deputy Superintendent Sudirman Kram said that the woman’s husband, who was in a state of panic, continued to drive towards roadblock to seek help.

Our officer found that the woman was giving birth and helped in the birth of the baby. Coincidentally, another officer who was reporting for duty also helped to cover the baby with the towel that she brought

He said the baby and his mother were then taken to Sarawak General Hospital for further treatment.

The incident was also posted online by Facebook user Affy Johari who applauded the officers and said that the baby is safe.