The chilling photo was captured by Malay Mail Photographer Hari Anggara during a raid that saw 156 people including women and children detained by immigration. 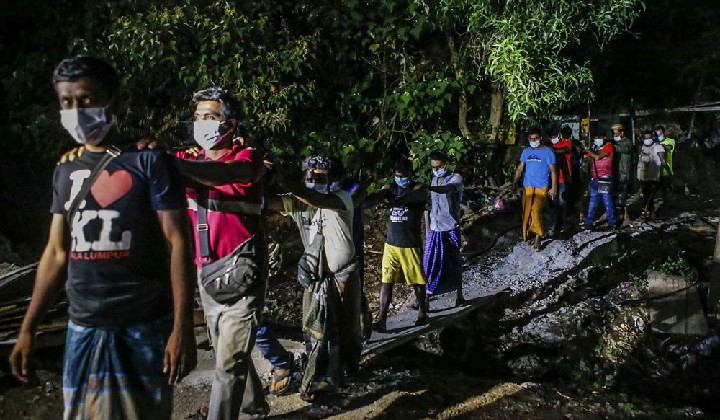 Malaysians were broken-hearted over an image that captured the deep stare of an unknown man leading a group of undocumented migrants who were being detained by immigration authorities during a raid of an illegal settlement located in Cyberjaya on 6 June.

Social media postings made by local actress, writer and director Jo Kukathas had rallied netizens to the plight of these people who the ‘mainstream’ regularly classifies as aliens or illegals here in the country.

“This undocumented migrant worker being frog-marched by the authorities to some hell hole wears an I ❤️KL t-shirt. Tragically KL doesn’t love him back. KL uses him to keep its factories and businesses grinding out tinsel,” wrote Jo Kukathas conveying the shock and disappointment felt by many who saw the picture which by now has received global views.

She also went on to draw parallels between the inhumanities allowed to happen to undocumented migrants here in Malaysia with the atrocities that are happening in Palestine.

We allow migrants here to be treated like this, we slap and abuse them, we strip them of their rights and their humanity, we jeer at their sorrows, we treat them like criminals, yet we’re shocked by Palestine.

Comments online also show that people are deeply disturbed by the actions taken by Malaysian authorities towards addressing illegal migration in the country, especially with the Covid-19 pandemic raging on.

Many had echoed the opinion conveyed by the veteran artist, saying that the steps taken by the government do not reflect the country’s best interest or what’s best for the rakyat.

Worse, they say they are rounding up migrants and doing all this to safeguard us Malaysians. Not in my name, please.

The powerful photograph in question was taken by Malay Mail Photographer Hari Anggara at the scene of the Cyberjaya raid which saw 156 people, including women and children, detained for not having proper travel documentation or identification – the same operation where authorities had sprayed disinfectants on the people they had detained.

Other images captured by members of the media during the raid, which were reshared by netizens online, showed migrants detained during the operations living in deplorable conditions and made to sit together hand-cuffed in relatively close proximity to one another.

You cannot achieve herd immunity if you exclude migrant workers from vaccination.

Migrant workers are not going to come forward to be vaccinated if you scare them with your actions. https://t.co/k77OpPLtWm

Read More: We Sprayed Dettol On Everybody, Including Each Other, Says Immigration After Recent Incident

Malaysian authorities have been clamping down hard on undocumented migrants nationwide – with the first major raids beginning in March 2020.

Previously, Prime Minister Tan Sri Muhyiddin Yassin cast blame that the surge of Covid-19 cases in the state of Sabah had stemmed from undocumented migrants.