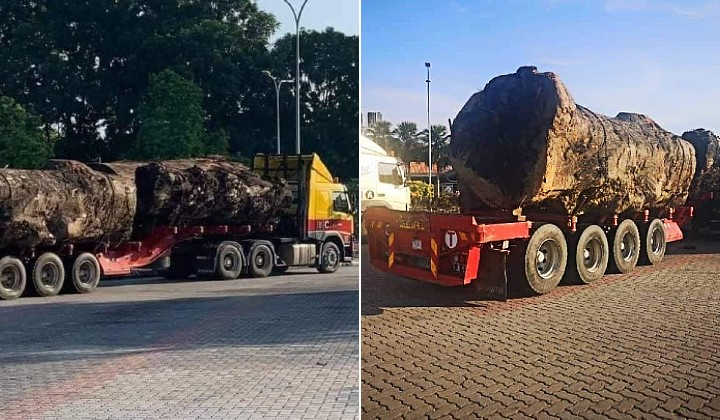 Malaysians were devastated when it was revealed that the Terengganu Forestry Department had approved the logging of a 500-year-old Chengal tree that once stood tall at the Sungai Nipah Forest Reserve in Kuala Terengganu.

Recently, remnants of the gigantic and now-dead tree were spotted on a flatbed trailer said to be on its way to be processed at sawmills in Dunggun and in Rawang, Selangor.

Terengganu Forestry Department Director Roslan Rani explained that the state had rubber-stamped logging operations at the forest reserve in 2017 and that everything had been licensed.

He added that the state had plans to develop the area where the tree once stood, however, failed to provide further details on what they planned to do there.

Able to grow taller than a 10-storey building, the Neobalanocarpus heimii or more commonly known as the Chengal tree, is a species that can only be found living in Peninsular Malaysia, Thailand and Singapore.

The Chengal thrives in tropical lowland forests as well as swampy areas, and when conditions are just right, the trees can become the dominant feature in an area’s landscape – towering up above the forest canopy.

Timber from the Chengal tree is prized for its quality and durability, and is strong enough to be used in heavy construction such as building bridges as well as for making boats.

Though the species can be found widespread across the Peninsular, its growth is restricted to patches of protected areas and forest reserves.

The Chengal is classified as an endangered species in the International Union for Conservation of Nature’s (IUCN) red list with its population on the downfall.

The tree has historically been exploited for its timber and logging remains the biggest threat to the species’ survival.

The largest Chengal tree ever discovered in Malaysia was found in 1998 at the Pasir Raja Forest Reserve in Terengganu.

Standing at around 65 meters tall and with a trunk that stretches 17 meters around, the tree was estimated to be over 1,300-year-old.

Given the name ‘Chengal Besar’ or Big Chengal, the glorious specimen was credited as the largest tree in Malaysia by the Malaysian Book of Records.