The Penang state government are at odds with the Federal government over the issue. 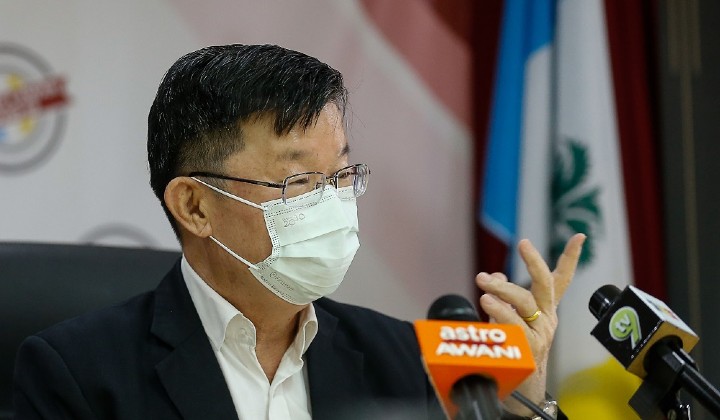 The Penang state government has been in the spotlight recently over the vaccine approval issue.

Recently Chief Minister Chow Kon Yeow claimed that they’ve received 1,000,000 doses from a company and urged Putrajaya to approve them to be used on Penangites but there was resistance by the Federal government.

But this was quashed by Science and Technology Minister Khairy Jamaluddin, who said that he did background checks on the company and it turns out that the offer was a scam.

How did it get here?

Reports surfaced of Penang wanting the Health Ministry to approve the donation of two million doses of Covid-19 vaccines from a private company.

Chow said the vaccine donation would be beneficial to the state and expedite the National Covid-19 Immunisation Programme (NIP) to achieve herd immunity.

By granting the approval, he said that MOH could redistribute vaccines intended for Penang to other states instead and questioned why Selangor and Sarawak are allowed to purchase their vaccines but they can’t accept the donation.

If Sarawak and Selangor are allowed to purchase their own vaccines, why can’t the Health Ministry grant approval to the Penang government to accept the vaccine donation? The cases here are escalating and there is a need for us to speed up vaccination.

KJ steps in to debunk the claim

Khairy held a press conference after the approval claim was made by the Penang CM and said that the offer was actually a scam.

He said that the conclusion was made after conducting a company search on the private company allegedly based in Hong Kong as well as checking with the supplier of the vaccine, Sinovac Biotech Ltd.

According to NST, he also expressed his disappointment towards the state government for the accusation and said the NIP is something which shouldn’t be politicised.

Khairy also reiterated that the Ministry welcomes those who want to assist the Federal and state governments obtain supplies of the Covid-19 vaccines.

Penang government wants the private company to come out

After Khairy made the press conference, the Penang CM later issued another statement, now urging the private company that pledged to contribute vaccines to state to come forward and deny the claims.

Chow said the MOSTI Minister’s accusation was serious and thus the director and the company should come out.

MalaysiaKini quoted the CM who stressed that the state government had taken prudent action when it accepted the offer via a letter which dated Feb 1 and even consulted the views of the Penang Health Department before making the decision.

The man behind the fiasco finally says something

It’s reported that the man who claimed to be the Sabah businessman offering the vaccine doses insisted that his offer was genuine and was not a scam.

Malay Mail quoted the man who identified himself as Yong Chee Kong from Hong Kong-based investment company Xintai Enterprise Development Limited, who said that there was no link to the firm when the donation offer was made as he was acting in his personal capacity and never wanted the exposure.

This is now a political issue. It’s not fair to me. We only wanted to donate the vaccines, not give cash.

He also said that the offer was initially meant for Sabah, but after they were ignored, he turned his attention to give the vaccines to Penang instead.

I had reached out to the Sabah government via the chief minister but when they didn’t respond, Penang approached me and said since Sabah has rejected the offer, why not offer it to the Opposition?

Yong also explained that the letter which had his signature was written by the Penang DAP to be presented as a formal offer and that it unfortunately carried his private address.

I didn’t write the letter, this is something my boss in HK wanted, it shouldn’t be my address.

Khairy Jamaluddin who is also the National COVID-19 Immunization Program Coordinating Minister claimed afterwards that these are serious allegations against his office regarding an individual named ‘Yong Chee Kong’.

This is a serious allegation against my office here.

He said that his officers had contacted ‘Chee Kong’ before to ask if he had proof of the contribution he wanted to give to the Penang government.

Serious allegation against my office here. My officer got in touch with a person claiming to be Yong Chee Kong. She asked him if he had proof of the donation so we can facilitate it (e.g. order with Sinovac). He said no. He said he has money in an account in Hong Kong. https://t.co/Xhbl35p4o3

The Minister explained that if there was evidence of the donation, his party would expedite the process.

However, Khairy said that the individual involved said he did not have the evidence, instead he had money in an account in Hong Kong, according to reports from Astro Awani.

As I said yesterday, I am happy to facilitate the donation if Mr Yong can prove he can procure the vaccines or make an official contribution to the Government.

DAP Secretary General Lim Guan Eng, who had also attended the Penang government’s press conference has also offered to apologise if the matter did indeed turn out to be a scam.

Meanwhile, Sinovac’s sole distributor in Malaysia, Pharmaniaga has come out recently saying that Yong never approached the company to purchase the Sinovac vaccines.

The Star quoted the company’s Managing Director Datuk Zulkarnain Md Eusope who said that the two parties were not in contact.

They never contacted us, and we also did not contact them.

Meanwhile, the police have also taken Yong’s statement on his offer after police reports were lodged in Penang, The Star reported.