The group were said to have ignored the SOP, hidden their slippers and turned off the lights to avoid getting caught. 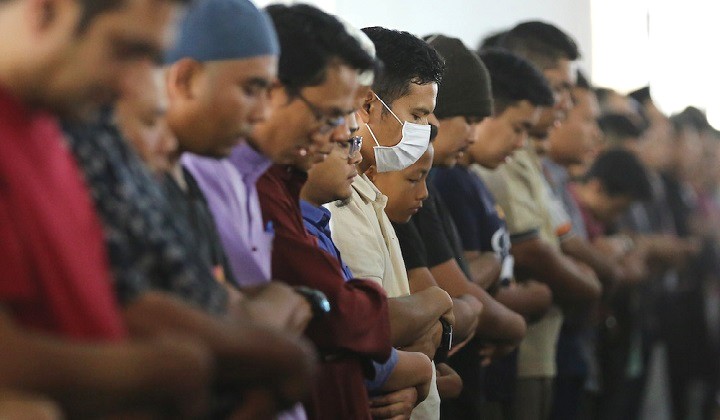 An entire village spanning two districts in Kelantan was placed under an Enhanced Movement Control Order (EMCO) when 78 Covid-19 cases were found in the community on 7 May.

Kampung Pauh Lima – situated in Bachok and Kota Bharu – and its 1,032 residents will be confined to their homes from 19 May till 1 June.

According to the Kelantan Police Chief Datuk Shafien Mamat, the village will be tightly secured to avoid villagers from moving about. Authorities will also be blocking off ‘laluan tikus’ or hidden trails within the village to keep people in.

104 officers will be on station throughout the (EMCO) period. We’ve identified seven laluan tikus and are looking for appropriate locations to set up barbed wires.

Kelantan state Health Director Datuk Dr Zaini Hussin confirmed that the outbreak in Kampung Pauh Lima had been caused by individuals refusing to follow SOPs while performing prayers and said that worshipers had failed to conduct temperature checks and had committed other offences.

As of 19 May, 84 people from the village, including two five-month-old twin baby girls were confirmed positive with Covid-19.

Praying in the dark

Harian Metro reports witness accounts that dozens of villagers would congregate at the surau daily to perform prayers.

Witnesses claim that worshipers would crowd together to perform ‘Taraweeh’ prayers during the month of Ramadan in the dark, with the light shut off, and hide their slippers to avoid being detected by authorities.

It’s understood that Kelantan religious authorities had allowed Taraweeh prayers to be performed in mosques and suraus in seven districts in the state which included; Kota Bharu, Bachok, Pasir Puteh, Pasir Mas, Machang, Tanah Merah and Tumpat during the month of Ramadan.

The SOPs provided by the state had limited congregational prayer attendance to only between 70% to 50% of the facility’s maximum capacity and limited prayer sessions to only 45 minutes.

Disobeying SOPs is a sin

Commenting on the matter, Kelantan Mufti Datuk Mohamad Shukri Mohamad called those who disobeyed SOPs (even to perform prayer) sinners.

He deduced that it was wrong for people to go against health guidelines, subsequently endangering themselves and others.

“The Prophet Muhammad S.A.W clearly said that if there was a pandemic in your area, don’t venture out. Don’t be selfish, instead, think about the good of the community,” said the Mufti who also expressed confusion as to how difficult it was for people to follow the rules despite living in a pandemic for more than a year.

He further explained that it was enough for Muslims to perform their prayers from the safety of home.