Ain has felt backlash from her school, now school teachers are standing up for her. 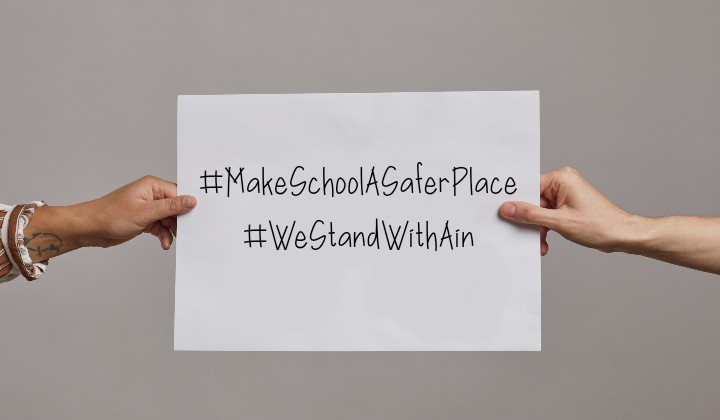 Teachers are standing with Ain and her #MakeSchoolASaferPlace movement after she exposed the casual rape culture prevalent in Malaysian schools and received both enormous support and backlash for it.

However, as a result, this movement has raised awareness of the sexual harassment and damage that casual rape jokes can cause, especially in an institution designed to protect and educate the younger generations.

Now, educators are standing with her and commending Ain on being brave and eloquent, with many promising to bring up such issues in their own classrooms to educate their students as well.

We educators stan with @ant33ater to #MakeSchoolASaferPlace
Lots of love and support from all of us!thank you for doing this, may the younger kids will benefit from this movement!💕 pic.twitter.com/ZLBhau0sx2

I am a public school teacher and I #StandWithAin . I believe education should defeat ignorance, prejudice and fear. School supposed to be a safe and nurturing place. I demand that everyone should #MakeSchoolASaferPlace . Teachers, parents, students, ministers.

One teacher even redesigned his lesson plan to include these topics. Teacher Stephen Isaac, who teaches at the all-boys’ school SMK(L) Methodist Kuala Lumpur, notes that his lesson plan includes discussion on the roles that his students play in prevention and in creating awareness.

Throughout this week, I've redesigned my lesson plan for my students by addressing rape culture & sexual harassment in schools.

They learned fundamental issues on rape & sexual harassment, and how its happening in schools & in our surrounding community.#MakeSchoolASaferPlace pic.twitter.com/fpmnVUtDvp

In an interview with MalaysiaKini, Stephen says that there are so many misconceptions about sexual harassment, from rape jokes to body-shaming to even rape between husband and wife.

Additionally, there is public perception that the teacher in question was being protected.

When you protect enablers, you are actually saying it is okay. So I think teachers need to be educated as well.