Police explained that the video was made public without the formal permission of the authorities. 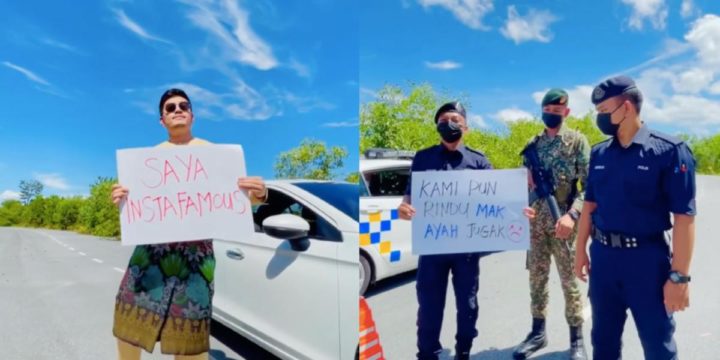 A social media influencer by the name of Hafiz Mahamad received a fine of RM1,500 for not wearing a face mask in his Hari Raya Aidilfitri parody video posted on Instagram.

According to police, the ‘instafamous’ personality had failed to abide by standard operating procedures and was called in for questioning on 3 May.

Hafiz’s video featured himself besides two uniformed police officers and an armed member of the Malaysian Armed Forces (ATM) who were believed to be on duty at the time.

It’s understood that the frontliners featured in the video were part of the Putrajaya Police Department’s Movement Control Order (MCO) compliance enforcement team.

At over two minutes long, the clip saw Hafiz attempting to ‘balik kampung’ for Aidilfitri, but was stopped by the authorities at a roadblock.

With Hari Raya music playing in the background, the video showed the man negotiating with the cops to let him pass and gave multiple excuses as to why he needed to go back home, which includes missing his mom and that he was an Instagram personality, before being apprehended.

Hafiz was fined not long after the video went live at 9pm.

Putrajaya Police Chief Mohd Fadzil Ali explained that Hafiz was not wearing a mask in the video and had apparently ‘made fun’ of the reasons people give to travel across state borders.

It would seem that the public also questioned the appearance of the uniformed officers in the video.

Netizens claimed that there are ‘procedures’ needed to be followed before content featuring police officers can be made or released.

Putrajaya’s Police Chief also said no formal permission had been granted by his department for the video to be made public.

I never permitted the recording or the release of the video, no payments or gifts were received by the police in this matter.