Among the names that popped up recently was Religious Minister Zulkifli Mohamad, celeberties like Siti Nurhaliza and Neeolofa as well as Muslim preachers like Ustaz Azhar Idrus. 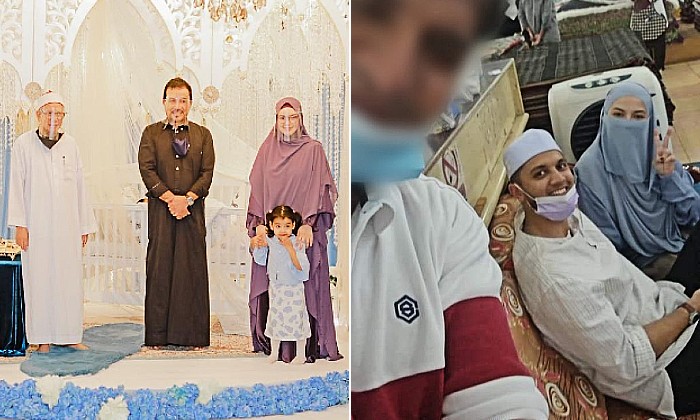 Whelp, it seems that Malaysians won’t be running out of things to be mad about any time soon as more public figures recently made the news for allegedly breaking Covid-19 standard operating procedures and Movement Control Order (MCO) rules.

Criticisms raged online as viral images showcased a number of popular celebrities, a government minister and several Muslim preachers attending events and supposedly travelling across state borders, over the weekend.

First on the list, we have national songstress Datuk Siti Nurhaliza and Religious Minister Datuk Seri Dr Zulkifli Mohamad Al-Bakri who was spotted at a fancy get-together hosted in honor of the singer’s newborn baby.

Siti and her husband Datuk Seri Khalid Mohamad Jiwa, had on 26 April organised what she calls a ‘simple’ aqiqah, maulid and tahnik ceremony – religious practices performed by some Muslims to celebrate the birth of a child – at their home in Kuala Lumpur.

With the celebrity posting pictures of the event online, Malaysians began questioning why the family had chosen to host the event when Covid-19 cases around the country were on the rise.

Some had accused the attending guests of violating MCO rules by crossing state borders as it was noted that some of them were living outside of KL.

In response to the controversy, Siti came out with a statement denying that any rule-breaking occurred during her baby’s ceremony.

The celebrity wrote on social media that the event was conducted according to SOP as it was held for a limited time and attended by a limited number of people.

Siti explained that the guests that she invited were ‘coincidentally’ in KL when the event was hosted. She also denied claims that Zulkifli Mohamad received special invitation to attend her baby’s party

Accusations came when we invited an independent preacher from a different state. We would like to make clear no cross border activity took place. Instead, the individual agreed to attend because he was coincidentally in KL during the time of the event. Regarding the tahnik event attended by Religious Minister Datuk Seri Dr Zulkifli Mohamad Al-Bakri, it was not a special ceremony as was thought. Instead, he only came by shortly to say prayers before rushing off for other matters.

Next up, we have even more celebrities who are being investigated for attending a ‘buka puasa’ event held at a hotel in KL.

Photos of the event which had circulated on social media revealed the serious lack of SOP compliance during the event as guests were seen not wearing face masks and ignored physical distancing advice.

Among the notable figures seen at the event were artists such as Caprice, Ashraf Muslim, Heliza Helmi, Iman Troye, Mawar Rashid as well as celebrity preacher PU Hafiz.

Dang Wangi Police Chief Mohamad Zainal Abdullah said that the organizers and several guests who attended the ‘Majlis Berbuka Puasa dan Rapatkan Saf 2021’ dinner on 29 April have been called in for questioning.

The case is being investigated under Section 21 of the Prevention and Control of Infectious Diseases Act 1988.

Finally, we have celebrity and entrepreneur Noor Neelofa Mohd Noor who is once again accused of travelling across state boundaries.

Posts spotted on the internet indicate that she had possibly travelled to Nilai, Negeri Sembilan with her husband Haris Ismail to shop for carpets. Apparently the two were busted for sharing an Instagram story showing that they were there at the store before deleting the post.

Naeem Carpet only have 1 particular store, that is in Nilai. Neelofa and her so called “ustaz” husband broke the SOP again, it’s been 3 times within 2 months whereas some cant even go back hometown to see their sick parents. Well, Sunday is @neelofa day to create controversy. 🙂 pic.twitter.com/r8XKU7uOZD

Previously the celebrity’s extended family was fined a total of RM60,000 for violating Covid-19 SOP during her wedding which took place earlier in 2021.

She and her husband also received public backlash after allegations that they had travelled to Langkawi for a honeymoon shortly after.

Its understood that the police will again be calling in the couple for questioning.

#Viral Celebrity Neelofa and husband will be called up by Nilai police soon over viralling of a video about their presence in Nilai 3, Negeri Sembilan recently despite interstate travel restrictions- Nilai Police Chief pic.twitter.com/Iu5mjpRvul