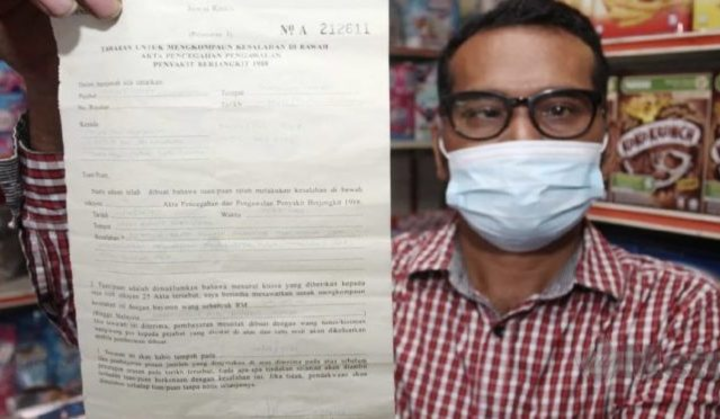 A man in Kelantan today was willing to surrender his shop as he couldn’t pay the RM50,000 compound imposed by authorities.

Mansah Marjurin, 47, who is the third person facing a huge fine for allegedly breaching the Standard Operating Procedures (SOPs) in Kelantan, admits that he does not have the resources to pay off compound.

He said that he would trade his shop as he’s already seven months late on rent, besides losing his car earlier this year after the bank repossessed his vehicle during the Movement Control Order (MCO).

Take my grocery store instead, indeed I will not be able to afford to pay a compound of RM50,000.

They came before midnight

Mansah recalled the incident in which authorities came to his shop at around 11:30pm, questioning why his shop was still open.

He said that at the time, the premise was already closed, except for a small door which was opened to allow for his relatives to come in and added that the grill to his premises was already shut but the four officers still issued him the RM50,000 fine.

I had closed the shop with the main door locked, but at 10 pm my wife’s brother came to visit the shop and at that time we were chatting in the shop. The small door was opened because there were small children coming in and out, not for customers. After that I was shocked when the policemen came and asked why the shop was still operating.

Mansah, who hails from Bukit Tinggi, Klang, admitted that he was shocked to see the amount because his income only depended on the grocery store sales. It’s reported that he is the sole breadwinner for his family as his wife is a full-time housewife.

Kelantan state government can’t do anything about it

Astro Awani quotes him as saying all regulations were made by the National Security Council (MKN) based on the report of the Ministry of Health Malaysia (MOH).

Meanwhile, MalaysiaKini quoted Kelantan Police Chief, Datuk Shafien Mamat who said that the police will re-examine the RM50,000 compounds imposed on three traders recently, including a man who sold burgers outside his house and a rojak seller.