This is in response to split public readiness on receiving the AstraZeneca vaccine due to a rare side effect. 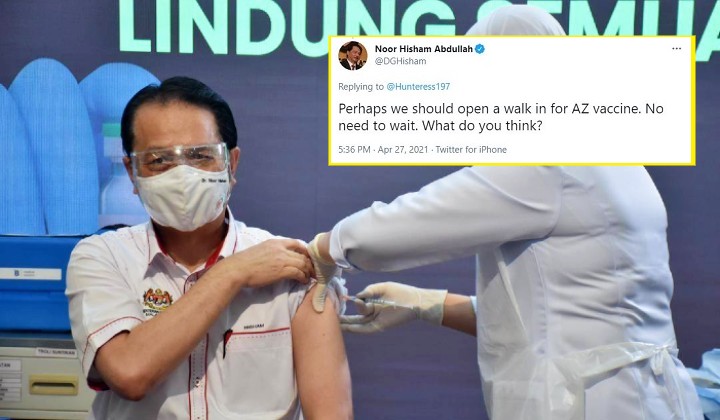 Anyone willing to skip the queue and take the AstraZeneca vaccine via a walk-in appointment?

Well, the Health Director-General Tan Sri Dr Noor Hisham Abdullah is actually considering implementing the move with the public currently split over the side effects of the vaccine developed by the drugmaker AstraZeneca and the University of Oxford

In a Tweet on Tuesday evening (27 April), the Health DG responded to a frustrated user who was willing to take the vaccine, saying:

“Perhaps we should open a walk-in for AZ (AstraZeneca) vaccine. No need to wait. What do you think?”

The aforementioned user had retweeted Dr Noor Hisham’s infographic explaining the risk of developing blood clots from the AstraZeneca vaccine in comparison to birth control, smoking and a Covid-19 infection.

Perhaps we should open a walk in for AZ vaccine. No need to wait. What do you think?

Responses to the Health DG’s suggestion has been largely positive, with many agreeing with the move and even volunteering to take up the AstraZeneca vaccine.

“I wouldn’t mind myself, better than waiting. In my opinion, in any forms of medication, there is always risk,” Tweeted one user. Another Twitter user replied: “Yes please. My hubby and I will be the first in line. My relations in (the) UK, aged between 38 till 70 have all been vaccinated with AZ and they don’t see what the fuss is all about.”

Malaysia has secured a total of 12.8 million doses from AstraZeneca, half of which will come via COVAX. The first batch arrived this week and the Health Ministry (KKM) confirmed the jab would be administered to those over 60 years old.

In a press conference on Monday (26 April) Health Minister Dr Adham Baba said the vaccine was found to be “suitable for use” for those aged 60 and older, and they were assessing available data before approving it for use for younger people.

After the news broke though, many Malaysians took to social media to voice their worries over allowing their parents and other senior citizens to take the vaccine even though the blood clot side effect was very rare.

Several cases of rare blood clots were identified by the regulatory body in the United Kingdom – the MHRA – after people received the AstraZeneca vaccine.

The blood clots occurred in veins in the brain (cerebral venous sinus thrombosis, CVST) and the abdomen (splanchnic vein thrombosis) and in arteries, together with low levels of blood platelets and sometimes bleeding.

According to BBC, 79 people – two-thirds of them women – experienced clots after receiving a first vaccine dose. Nineteen of them died.

This is in contrast to over 20 million AstraZeneca vaccines doses already administered across the UK by the end of March 2021.

The MHRA said about four people in a million would normally be expected to develop this particular kind of blood clot – though the fact they are so rare makes the usual rate hard to estimate.

Nonetheless, the MHRA states that benefits of the AstraZeneca vaccine far outweighs the risks of the virus – hospitalisation and death – especially for the elderly. It does say though that under-30s with no underlying health conditions should be offered an alternative vaccine where available.

The European Medicines Agency safety committee (PRAC) concluded that unusual blood clots with low blood platelets should be listed as very rare side effects for the AstraZeneca vaccine. However, PRAC stresses that the reported combination of blood clots and low blood platelets is very rare, and the overall benefits of the vaccine in preventing Covid-19 outweigh the risks of side effects.

KKM has also made the decision to proceed with the vaccine, based on clinical data which proved the benefits outweigh the harm.