Police have again taken the aptly named “Kancil buruk” off the roads after it was spotted around Kepong. 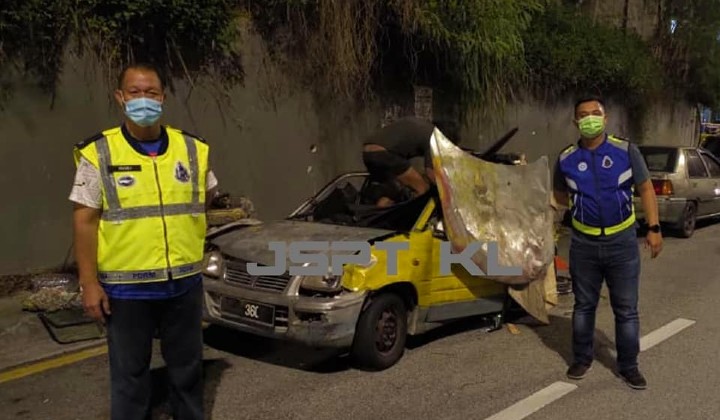 With tales of the Kancil legend aka Kancil buruk returning back from the depths of the scrapyard, there was a glimmer of hilarity mixed with concern this April. However, it is with deep sadness that we report the legend has fallen (again).

The Royal Malaysian Police (PDRM) and Kuala Lumpur Traffic Investigations and Enforcement Department (JSTP) confirmed that they have indeed arrested the owner of the legendary Kancil buruk in the early hours of Sunday morning (25 April 2021).

READ MORE: Legendary Kancil Buruk Is BACK! This Time With A New Paint Job In Kepong

Acting on the viral video, JSPT members detained the car in Bandar Metropolitan Kepong along with the 47-year -old driver whose address was in Bukit Koman, Raub, Pahang.

The mystery driver has actually been chugging along the roads with two similarly disheveled Kancils, one in dark green and the other that’s got splotches of yellow.

Both vehicles did not have road tax, nor were they in any condition to be driven safely on the roads.

The (yellow) Kancil did not have road tax, did not have a roof and the front tire on the right side was broken. The green Kancil had a broken mirror on the left rear door.

JSTP confirmed that the driver did not have a driving license.

Both cars were impounded under Section 64 of the Road Transport Act 1987 for not being fit to be on the road and endangering other users.

The legend of the Kancil buruk

Besides the tale of the yellow beetle on Karak highway in the dead of the night, the Kancil buruk has been one of the most popular urban road myths in Malaysia – albeit with actual, physical proof.

Back in 2019, the legendary Kancil buruk held together by sheer will (or magic) gained new heights of virality as Malaysians all across the peninsular came together to share their tales of spotting the car in their neck of the woods. Unfortunately, the Kancil was soon taken away by authorities

But its reappearance in Kepong this rang alarm bells, with Kepong MP Lim Lip Eng voicing out concern for the driver himself as well as the safety for other road users.

The police and JPJ also know about the existence of this car, they also do not know what to do. My party planned to help, but we were a little stuck, not knowing how to give help to this brother.

With the Kancil buruk fallen once again, we hope that the driver gets the help he needs this time.