Turns out there was a misunderstanding. 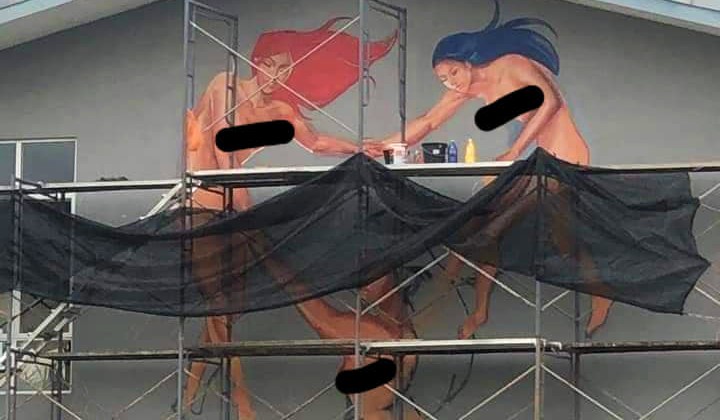 A mural painting in Kuala Selangor depicting three naked women had sparked flames of anger on social media on Monday (19 April), leading to police reports and even racialised comments.

The subject of the controversy was a depiction of three female forms in the nude holding hands to form a circle, on the exterior wall of the Sasaran Art Gallery Kuala Selangor in Kampung Sungai Buloh, Kuala Selangor.

This led to outrage among the public, and accusations of the artists promoting indecency and soon escalated to racist insults, including an angry mob protesting with racial accusations.

However, artist Lyana Leong has come out to clear the air.

It isn’t meant to be a naked mural.

In a series of Instagram stories, Lyana explained that the final piece would be clothed women, but she drew them naked first to get a better understanding of the proportion and scale of their bodies.

The clothing would be painted on in additional layers.

What happened was a misunderstanding, she said.

“The reason I painted the women without clothing is based on my experience in painting murals, I need to paint the first layer first – as in paint the nude women, then paint the clothing.”

While we were in the process of painting the mural, we used a black cloth so the public will not see the women’s ‘aurat’. But that one time, my fellow artist (Sliz) and I wanted to check the mural from afar to check for imperfections. So, we removed the cloth, inspected the mural, then covered it back.

The viral pictures were taken in that 30 minutes when the cloth was removed.

She also pleaded with social media users to stop racialising the issue.

Fellow artist Sliz also addressed the issue on his Instagram stories, explaining that the police had paid a visit, along with the city council and local politicians contacting them after receiving complaints.

“It’s completely understandable that people misunderstood the mural because they WERE naked. But it’s part of the process and also training for Lyana (proportions & scale).”

“But to summarise it all, it was a human mistake on my part.”

I have received many complaints regarding a mural painting at Balai Seni Sasaran, Sg Buloh since this afternoon. However, the unsightly mural is still in the process of being completed. I would like to thank the locals as well as the concerned public. Together we maintain harmony, ethics and manners of community life.

Kuala Selangor District Council (MDKS) president Rahilah Rahmat said that the local council had ordered the painter to complete the sensitive part of the mural within three hours after the issue went viral.

The mural was said to be a part of the preparation for an international exhibition to be held at the said art gallery, and expected to be completed by 26 April 2021.