But the government has announced ceiling prices for 12 items. 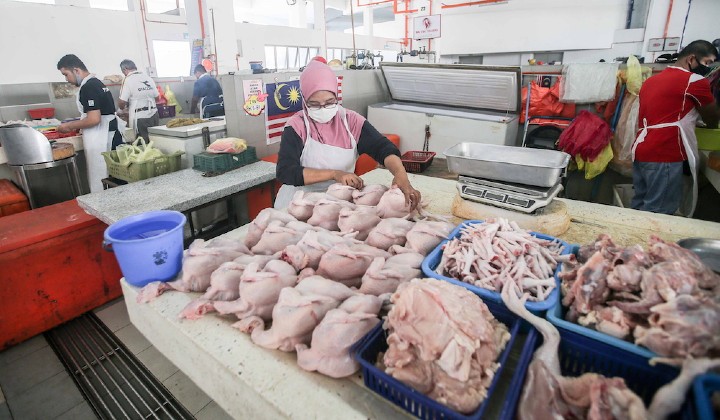 The hike in costs for imported chicken feed is one of the reasons why the country is experiencing a sudden hike in chicken prices according to Domestic Trade and Consumer Affairs Minister Datuk Seri Alexander Nanta Linggi.

Bernama quoted the Minister who said that that there are several factors that contribute to the increase but the most significant is the hike in the costs of chicken feed since January this year, namely, imported maize and soy.

Government comes out with price control scheme for Hari Raya

However, he said that his Ministry has held engagement sessions with major chicken farm owners in the country and discussed with the Ministry of Agriculture and Food Industries (MAFI) on implementing a fixed price for standard chicken to reduce the impact of the situation.

After the discussions, the price of standard chicken is now fixed at RM7.90 under the 2021 Aidilfitri Festive Season Maximum Price Control Scheme (SHMMP), for a period of a month starting tomorrow 21 April until 20 May. In 2020, the price was set at RM7.50.

READ MORE: “Our Chicken Has Always Been RM5.99/KG”, Says Lotus’s While Announcing Their Raya Promos

The scheme announced involves 12 items which are divided into four categories:

It’s also reported that the list of items in this year’s SHMMP Hari Raya Puasa is not final and more items will be added in the future.

Nanta said said that the price control is implemented at every level in the chicken distribution chain from farms to retail shops.

Under the Scheme, certain types of essential goods are identified as price-controlled goods during the festive season to set maximum prices at the producer, wholesaler and retailer levels within a certain period.

This scheme is implemented throughout Malaysia and the price set varies by area and district.

This (price control mechanism) does not burden the traders, because all stakeholders in the chicken distribution chain have obtained their respective profits.

Not all chicken are created equal

Although ceiling prices have been set for these items, Nanta said the price control only involves live chicken, standard chicken and super chicken during the Aidilfitri festive period while the prices of chicken parts which have been cut, such as the breast, leg and thigh are not controlled.

Super chicken are described as poultry that are slaughtered and dressed without leg, head, liver and gizzard.

UK And Europe Face The Biggest Bird Flu Outbreak This Year, 48Mil Birds Have Been Culled