These are serious accusations that have sparked unhappiness among Malaysians who have been waiting for their vaccines. 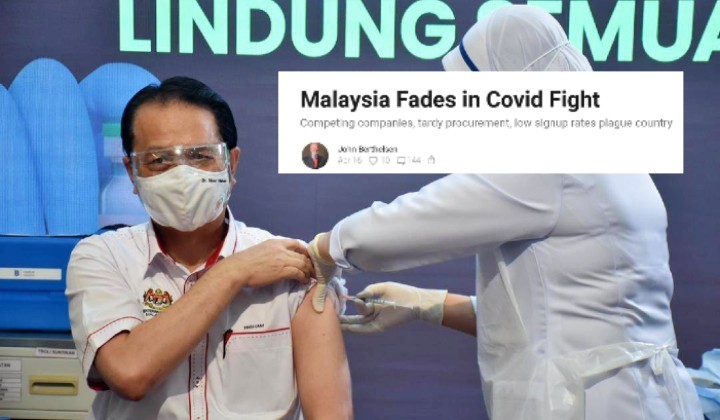 An article published on the Asia Sentinel made its rounds on Malaysian social media recently, sparking difficult conversations online.

The article, titled “Malaysia Fades in Covid Fight” writes that Malaysia initially started strong while other countries faltered during the pandemic, but has now slipped up, with non-stop rising Covid-19 cases and a miserable vaccine rate at just 3.2% of the population.

However, the article then comes up with further claims, implying the corruption of our current Yang di-Pertuan Agong, Al-Sultan Abdullah Ri’ayatuddin Al-Mustafa Billah Shah and top politicians regarding the vaccine for Covid-19.

In the article, author John Berthelsen claims that “two well-placed sources” say Sultan Abdullah went to the United Arab Emirates in January, with the Foreign Minister Hishamuddin Hussein and the Attorney General Idris Harun in tow.

This is a scandal which is being talked about in social circles and at highest levels of government, but no one dares to go public because of the sedition laws and the emergency called by the king.

The anonymous sources quoted by the Asia Sentinel claim that this news is hushed up.

They visited the Agong’s best friend, the crown prince of UAE Sheikh Mohamed Zayed Al Nahyan. While there, they were vaccinated with the Sinopharm vaccine, which is not recognized by Malaysia– and is therefore illegal here.

Allegedly, the Agong then received 2,000 more doses of the vaccine, which he then brought back to Malaysia to be distributed to his family, friends, and business partners.

The Agong has not been the only royal implicated. Two princesses from Spain who also visited the UAE admitted to receiving the vaccine and faced major backlash from their own country as critics slammed the move as “preferential treatment for royalty”.

According to this article, the problem began when the Health Ministry began issuing the ‘yellow booklets’ to show that the holder has been vaccinated and can travel internationally.

Health Director-General Tan Sri Dr Noor Hisham Abdullah allegedly stopped the Ministry from issuing these booklets to the Agong’s family as the vaccine they used was not recognized by Malaysia and therefore should not receive the booklet.

According the to article, Dr Noor Hisham also fell out of favour within the politcal sphere.

[Noor Hisham] …who initially was regarded as being instrumental in keeping cases down but who now is widely disliked in government circles for being dictatorial although his public image remains positive.The anonymous source as quoted by Asia Sentinel

According to the article, Dr Noor Hisham dictates what can be and cannot be done in a “totally dysfunctional cabinet made up of incompetent ministers”.

Some have even criticized how long it took Dr Noor Hisham to approve the Pfizer vaccine for use in Malaysia, long after other countries have approved it. As a result, Malaysia’s vaccine supply has to be mixed with vaccines from other countries, like the Sinovac vaccine.

Netizens held mixed reactions. Many condemned the scandal and cronyism, while other were more critical of these sources that spoke to Asia Sentinel.

The government has denied all claims, saying that such unfounded allegations tarnishes our Agong’s name.

Health Minister Datuk Seri Dr Adham Baba also questioned where the author received the sources of his claims, and accused the author of trying to create a negative perception of Malaysia.

Additionally, Dr Adham noted that the procurement of all vaccines must go through stringent procedures set by the National Pharmaceutical Regulatory Agency (NPRA) and only after that will the vaccine receive the approval to be distributed by the Covid-19 Immunisation Task Force.

The doctor named in the Asia Sentinel article, Dr Hanafiah Harunarashid from Hospital Chancellor Tuanku Muhriz (HUKM), came out to state that he had never administered the Sinopharm vaccine to anyone.

I have nothing to say as it is just not true.

What is the Asia Sentinel?

Asia Sentinel is categorized as left-center biased by Media Bias Fact Check, and historically has used emotionally-loaded headlines with poorly-sourced articles and does not provide hyperlinks. They have yet to respond to the denials of their allegations.

Still, the article sparked conversation among the rakyat, many who have been rather disappointed at the delayed roll-out of the vaccines.