Experts have warned us that this could happen. 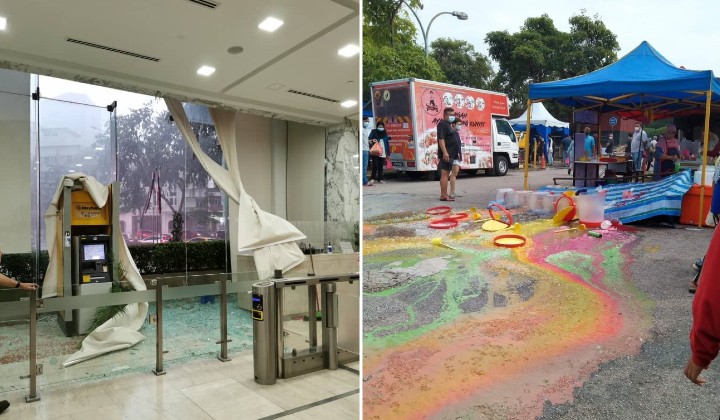 On the first day of Ramadan, Malaysians were greeted with a freak storm that devastated many parts of the country from the capital Kuala Lumpur all the way down to Johor.

Many videos were posted online showing the aftermath of the heavy rain in several locations.

It was also reported that some parts of Kuala Lumpur were flooded, causing traffic jams around the city.

A glass panel was shattered to pieces at the Etiqa Academy in Masjid Jamek, leading to panic as the unsuspecting crowd seeking shelter from the torrential rain were then rained with shards of glass.

It was also reported that multiple trees collapsed in many areas around Kuala Lumpur, but luckily, there were no fatal accidents.

The heavy rain and strong winds also affected many hawkers in various states in the country, including Melaka and Johor.

Based on a video from Bernama’s official Twitter account, hawkers tried to salvage their stall in the rain in Wangsa Maju during the first day of the Ramadhan.

The heavy rain affected other states in West Malaysia such as Melaka and Johor as well as netizens shared the ravaged stalls at bazaars near them.

One hawker even posted a video showing what it’s like being the stall during the heavy downpour.

Climate change might have something to do with this

It has been reported before that the main reason why storms like yesterday happened was mainly down to global warming.

Experts have previously warned Malaysians for even heavier rain as well as more severe storms and floods.

NST quoted Dr Renard Siew in 2019 who said that although monsoon and rain seasons do happen, the effect of global warming has made storms bigger and the rains heavier.