Fahmi Fadzil also says he was unsatisfied with the traffic impact assessment report provided and requested DBKL to study the issue more comprehensively. 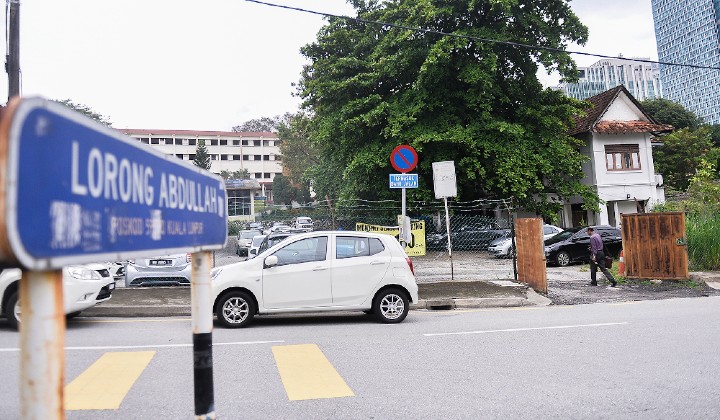 Residents at Jalan Abdullah, Bangsar, are crying foul over demolition works for a new 34-storey serviced apartment on 3 blocks of bungalow land.

The demolition comes just two weeks after residents and the Save KL Coalition (SKL) met with representatives from the developer and Kuala Lumpur City Hall (DBKL), among others, at Lembah Pantai MP Fahmi Fadzil’s office to protest the development.

Ksharmini, who has represented the residents in working with SKL, said the outcome of the March 27 meeting was that another geotechnical study and report would be conducted. DBKL was also to carry out a site inspection with the stakeholders soon.

Ksharmini also claims the developer, SP Setia, has not provided the development order for the proposed project even though residents have repeatedly requested for a copy.

Fahmi noted that he is made to understand that the orders for demolition and orders for development are separate orders.

However, Ksharmini and SKL chairman M Ali noted that a dilapidation survey has not yet been conducted, nor has the adjacent heritage houses been notified.

In fact, the residents have been protesting the development for years. The houses built on Jalan Abdullah, a no-through road, are mostly heritage houses that were built in the 1920’s to 1940’s, making them some of the oldest residential houses in Bangsar. Due to their age, they are suspectible to being damaged by the construction at such close proximity.

But it’s not just the houses that are old. According to residents, the piping and sewage system of the area are old and are only built for residential capacity. If the development decides to connect to the old systems, it could collapse under the additional demand for the 34-storey development and usage when occupied. Even at the current state, the low water pressure had caused firefighters to be unable to put out a fire that ultimately destroyed a house that was built in the 1950s.

Additionally, Jalan Abdullah is a small road that ends in a dead-end. It is already facing traffic issues due to illegal roadside parking. The new development on this road, particularly if the road is later opened up, will see immense traffic that will lead to massive jams right at the residents’ doorsteps, both old and new.

Fahmi himself said he was unsatisfied with the traffic impact assessment report provided and had requested DBKL to study the issue more comprehensively.

This whole fiasco has been years in the making. In early 2019, the area was suddenly re-designated from “residential” to “major commercial” under the Kuala Lumpur City Plan 2020.

Since then, the residents say they have been continuously shocked by what appears to be continuous development towards construction without prior notification to them.

Even after numerous protests and meetings with DBKL and Lembah Panti MP Fahmi Fadzil to stop the development, it continues.

Get Your ‘Iftar Bangsar-wan’ This Ramadan Somewhere In Knowhere, Bangsar [Review]