Neelofa was seen honeymooning with her husband just weeks after controversy over her wedding for breaking SOPs. 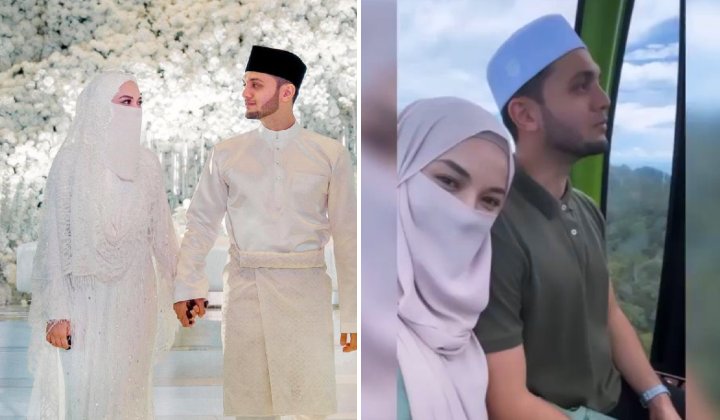 Local celebrity Neelofa has been under fire for travelling interstate during the Conditional Movement Control Order (CMCO). She travelled from Kuala Lumpur, which is still under the CMCO, to Langkawi on what is allegedly a honeymoon vacation.

Inspector-General of Police Tan Sri Abdul Hamid Bador noted that recent pictures and videos shared by the businesswoman seem to suggest that it is a “free and easy” leisure honeymoon trip instead of a work trip. She and her husband will be compounded if they are found to have breached the SOPs.

Controversy began at the wedding

However, the controversy surrounding her seemingly flippant attitude towards SOPs has already been building for some time.

She is newly wed with fellow celebrity husband Haris Ismail, also known as PU Riz, at a wedding held at Grand Hyatt Hotel on 27 March 2021 that also caught flack for not adhering to SOPs such as physical distancing and wearing masks.

People behave as if a virus gives a damn tht u are family members or privileged, will not infect, & stays away. I’m sorry, expect a cluster frm this wedding. pic.twitter.com/UyPFmSbFoR

Even Religious Affairs Minister Datuk Dr. Zulkifli Mohamad Al-Bakri was in attendance, though when asked about SOPs for the wedding, he refused to comment.

At that time, netizens were already criticizing her for her bold disregard for SOPs, claiming that she should not be above the law just because she is a celebrity.

A trip up north to Langkawi

A week later, she announced that she had arrived in Langkawi with her husband PU Riz. Under the CMCO, interstate travel is not allowed unless express permission is obtained from the police and the reason for the trip must be serious, such as work.

She claims that this was for a collaboration with Chatime to promote some of their new stores in Northern Peninsular Malaysia. This was supported by a statement released by Chatime Malaysia. Her permission letter for travel was obtained from the Sri Hartamas police station.

In an attempt to do some damage control, she posted an Instastory with her alleged collaboration with Chatime, which simply showed a few Chatime drinks in ice and a plain handwritten note.

This has drawn serious crtiticism from netizens who note that the collaboration appears very last-minute and badly planned, suggesting that the beverage company is being used as a cover story.

In response, Neelofa has posted that she is “blessed” that all this controversy has brought so much more additional marketing and advertising for Chatime in Langkawi.

Since then, Neelofa has posted images and videos of her and her husband riding a jetski together, taking a cable car ride together, and watching the sunset together. These uploads have since been deleted.

Because of these images and videos of a seemingly leisurely honeymoon with her newly-wed husband, doubt has been thrown on the legitimacy of her Chatime collaboration, even by the police.

Both Neelofa and her husband have been asked to report to the police for further questioning, and if they are found to have broken CMCO SOPs, both will be compounded.