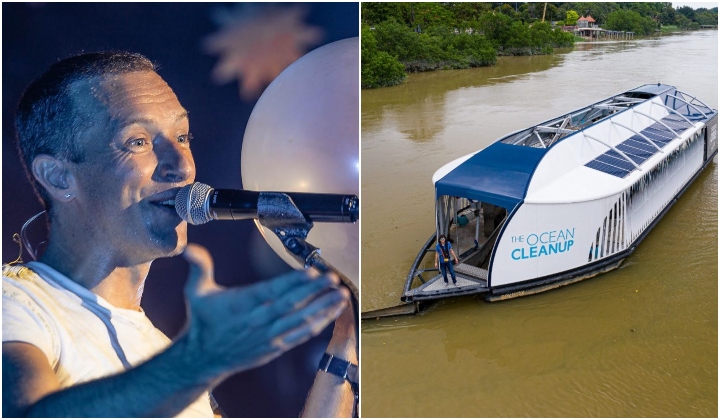 Yet to take the stage in concert in Malaysia, British sensation Coldplay reaches out in a different manner. The band has long had green initiatives at heart, shifting its sights to the Klang river, saying “I will try, to fix you.”

The lads are treating us to a watercraft, the Interceptor 005, valued at USD 777,000 (~ RM 3.2 million), with hopes of stopping garbage from reaching the ocean. The craft is designed by Dutch non-profit organisation, The Ocean Cleanup.

Without action, there could be more plastic than fish in the oceans by 2050, which is why The Ocean Cleanup’s work is so vital. We’re proud to sponsor the Interceptor 005 which will catch thousands of tons of waste before it reaches the ocean.

The second of two Interceptors deployed in Malaysia, this one is locally built in partnership with Finnish firm Konecranes, at the MHE-Demag facility in Bukit Raja, Klang. Projected to make a considerable difference, the machine is expected to collect up to 100 tonnes of trash, especially plastics, on a daily basis.

Founder and chief executive officer and founder of The Ocean Cleanup, Boyan Slat, says Malaysia is the first to receive the Interceptor 005. The machine is the first of two, in a series production to tackle 1000 of the world’s most polluted rivers, also the first of the third generation design.

Known in production as Neon Moon 1, the Interceptor is currently under construction and will be completed in mid-2021, expected to hit the water soon after. Some of its features include a 50-cubic metre storage capacity, capable of holding up to 100,000 kilograms of waste. Best of all, it works autonomously, and can continue collecting even while the dumpsters are being emptied.

Slat says plastic wastes in the ocean eventually travels to ocean garbage patches where debris naturally accumulates in a vortex of circulating currents. With plastic wastes staying in the whirlpools for years, action needs to be taken to prevent pollution which threatens an adverse impact on ecosystems, economies and health.

The state of Malaysian rivers

Our rivers have long been polluted, more and more each day with waste management constantly overlooked. The Klang river is so heavily polluted due to industrial discharge, improper sewage treatment, residential discharge and soil erosion.

According to research by The Ocean Cleanup, the Klang river is in the world’s top 50 most polluted rivers, though it is not the most polluted in Malaysia. An Environmental Department (Jabatan Alam Sekitar) study showed, the number of polluted rivers significantly increased from 36.4% to 89.3% of 473 rivers observed over the course of four years.

In 2014, a total of 1.5 million sources of pollution were found in Malaysian rivers, ranging from food services establishments and wet markets, to rubber and palm oil mills.

The Ocean Cleanup has presented its Interceptor as a solution for heavily polluted waterways since 2019, for countries including the USA, Indonesia, Dominican Republic, Vietnam, Jamaica and Thailand.