Police are now looking for the suspect. 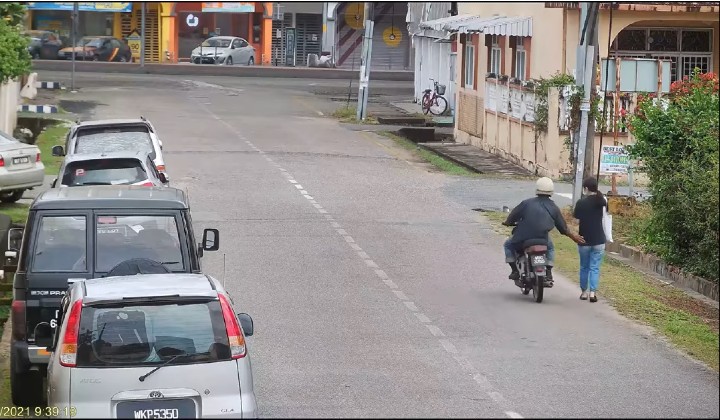 A pervert motorcyclist in Kota Baru, Kelantan was caught on camera groping a woman who was walking to work.

CCTV footage shared online showed the man had spent some time circling the streets before eventually spotting the lone woman. He then stopped and was seen conversing with her but drove away as a couple of cars approached.

The woman was seen backing away from the conversation and even walked in the opposite direction for a bit before heading back to her intended destination. A few seconds later, the motorcyclist turned back towards the woman, waited for passing vehicles to go by and groped the innocent pedestrian.

As he sped off, she appeared to be frozen in shock by the sexual assault in broad daylight.

According to Kosmo!, the incident took place at 9.40 am at Lorong Limau Manis, Jalan Hamzah in Kota Baru.

The 18-year-old woman filed a police report on the same day. Kelantan Criminal Investigations Department chief, Assistant Commissioner Wan Khairuddin Wan Idris said that the police were looking for the suspect, estimated to be between his 40s to 50s, and rode a brown Honda C90 motorcycle.

Investigations are ongoing under Section 354 of the penal code for assault or use of criminal force to a person with intent to outrage modesty.

A 2019 survey by the Women’s Aid Organisation (WAO) revealed that 50% of sexual harassment occured in a public place or public transportation – most of which were sexual assault (unwanted touching in a sexual area), verbal comments of sexual nature, sexually explicit letters, pictures or texts, and flashing.

The NGO also points out that Malaysia’s existing legal framework for sexual harassment is seriously flawed and fails to comprehensively protect against sexual harassment. Currently, only the Employment Act 1955 clearly defines sexual harassment, but is limited to workplace interactions. Employers can also choose not to investigate if they believe that the complaint is “frivolous, vexatious or is not made in good faith”.

A 2016 landmark ruling by the Federal Court introduced the tort of harassment, which allows victims to sue sexual harassers and potentially obtain compensation. However, it is a very costly and time-consuming process that’s also public. The landmark case above took 7 years from her initial complaint and 5 years of legal battle before a verdict was ruled.

READ MORE: Sued By Her Sexual Harasser, She Fought Back & Opened The Door For Malaysian Survivors

According to Women’s rights group Joint Action Group for Gender Equality (JAG), the Sexual Harassment Bill is pertinent in bringing changes that protect survivors while punishing the harassers, among which include:

The Sexual Harassment Bill was initially scheduled to be tabled during the March 2020 Parliamentary session before the abrupt government change. Current Women, Family and Community Development Minister Datuk Seri Rina Harun told New Straits Times in June 2020 that the Bill will be tabled “hopefully the next sitting (in November) or early next year.”

However, with Parliament suspended until August 2021 until the state of Emergency is over, the Bill experienced yet another setback.

In February 2021, Rina Harun said the draft of the bill is in the final stage for scrutiny by the Attorney-General’s Chambers (AGC) and will be tabled once Parliament convenes. Until then, Malaysia’s sexual harassment survivors are forced to keep waiting.