Kuala Lumpur is also said to be the most dangerous place in Malaysia. 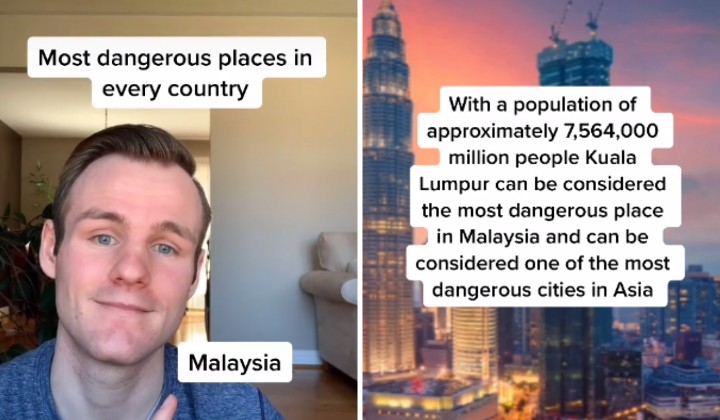 It seems that a recent video posted on TikTok caught the attention of Malaysians recently for saying that Kuala Lumpur is one of the most dangerous cities in Asia.

Uploaded by user Ethan Luke on the social media platform, the video stated that Kuala Lumpur has an overall crime risk rating of medium with vandalism, theft and robberies being the most likely crimes to occur.

Although Kuala Lumpur is considered dangerous, Malaysia on average is safer than the United States.

Some Malaysians who commented on the video were quick to question the validity of the facts and said that Kuala Lumpur is not that bad.

Others, however, agreed with the video, but blamed the Perodua Myvi, one of the most infamous local vehicles as the reason why Malaysia is so dangerous.

But is Kuala Lumpur a dangerous city?

It’s reported that Kuala Lumpur is ranked 35th out of 60 cities in the Safe Cities Index 2019, scoring 66.3 points overall which is a from 2017’s index, where the capital was ranked as the 31st safest city.

The city scored above average for personal safety, which measured factors such as:

It hit below the average mark for the other three indicators:

Based on the stats from the Department of Statistics Malaysia (DOSM), Kuala Lumpur tops the list in the country with a crime index ratio of 529.3 in 2019 – almost double compared to Selangor which is 304.3.

Meanwhile, a study by the Center for Southeast Asian Studies say that 42.4% of the total index crimes in Malaysia between 2010 and 2017 occurred in the states of Kuala Lumpur and Selangor.

The most common crimes cited were unarmed robbery and vehicle theft although the number of reported cases have been decreasing between 2010 and 2017.

The US Department of State has also assessed that Kuala Lumpur is a High-Threat location for crime directed at or affecting official US government interests.

The report stated that the most common crimes include petty theft (particularly purse snatching and pickpocketing), smash-and-grab thefts from vehicles, and residential burglaries. Violent and more serious crimes are considerably less common.

However, Kuala Lumpur has seen a drop in crime recently, due to the Movement Control Order (MCO) and crime prevention methods, based on reports by The Star.

It was also reported by the Straits Times that between 18 March to 31 March, the crime index in the city went down by 57.4%, compared to the same period a year ago.