There have reportedly been a total of 10 different helicopter crashes in Malaysia since 2015. 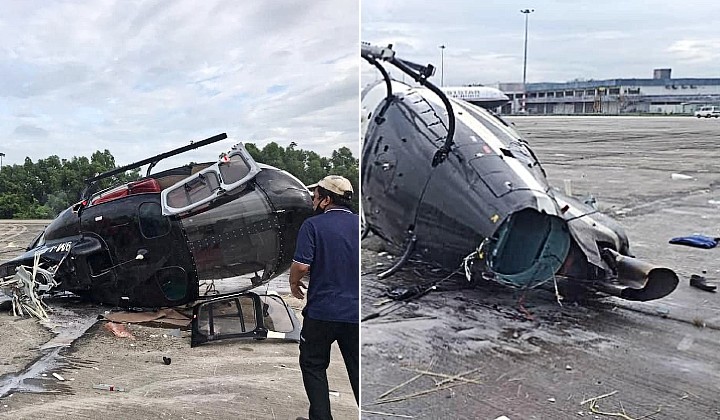 An Airbus AS350 B3 helicopter carrying five people crashed at the Sultan Abdul Aziz Shah Airport (Subang Airport) in Petaling Jaya at 9.25 am this morning (24 March).

On social media, witnesses of the crash shared video footage believed to have been captured moments after the accident. In one clip, the helicopter was shown smoking in wreckage before its spinning blades came to a stop and rescuers rushed to the scene with fire extinguishers.

Pantang maut sebelum ajal, the dramatic scene when a #helicopter crashed in #Subang this morning! The power of #SocialMedia that lets me share with this wonderful live video of the ill fated #helikopter pic.twitter.com/oGzHrUTgmh

Reportedly two people were injured from the crash with one person suffering a broken leg and a head injury. The three others were unharmed.

Authorities say that the helicopter luckily did not catch fire when it crashed. The aircraft was said to have departed from Sungai Lembing in Pahang at 8.30 am and was on a private flight to its final destination in Subang.

An investigation into the cause of the crash will be conducted by the Transport Ministry’s Air Accident Investigation Bureau (AAIB).

The incident follows a string of helicopter crashes that had recently occurred in the country.

Last February, six policemen were injured during a helicopter crash in Tawau, Sabah.

In January, two men were injured in a crash at the Port Klang Free Trade Zone (PKFZ) in Pulau Indah, Selangor.

In November 2020, two people were killed when two helicopters crash into one another in the air near Taman Melawati, Selangor.

READ MORE: Helicopter Crash In Melawati: Everything We Know So Far

Including this latest incident in Subang Airport, there have reportedly been a total of 10 different helicopter crashes in Malaysia since 2015.