Trying to make ends meet in illegal ways may not be the best option. 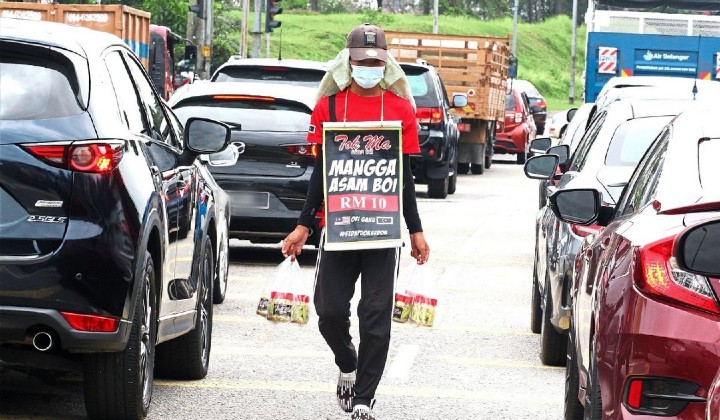 You might have seen an increase in street peddling these few months, where people often wait at traffic lights and walk through traffic selling pre-packed food and beverages to those in cars.

Fruits such as pickled mango (mangga jeruk) are common, but the trend has expanded to include the ubiquitous Ramly burgers, chilled drinks, or even personal-sized pizzas!

While roadside stalls themselves are not such a problem, it becomes dangerous for everyone involved when peddlers walk in traffic, weaving between cars and motorcyclists while peddling their wares.

It’s been illegal all along

The offense falls under Rule 10A(1) LN 166/59 of the Road Traffic Rules, which states that it is illegal to buy or sell goods at traffic lights and intersections.

The crackdown on these peddlers began last year, with peddlers receiving a fine of RM150 to RM2,000.

However, buyers should also take note that they may face fines for purchasing these goods as well.

In fact, Johor has begun issuing fines for buyers in an attempt to stop this dangerous activity.

This illegal street peddling is extremely dangerous for everyone involved, especially at intersections and traffic lights.

Motorists will be distracted by the peddlers weaving between cars, or hold up traffic if the light turns green while completing the transaction. Motorcyclists would not be expecting people walking in between vehicles, which could lead to accidents. The street peddlers themselves are putting their lives at risk, as they often do not wear any form of protective clothing.

While desperate times call for desperate measures, many have called for the government to provide safer alternatives for these peddlers to get sales.