The woman was unharmed and is now in police custody. 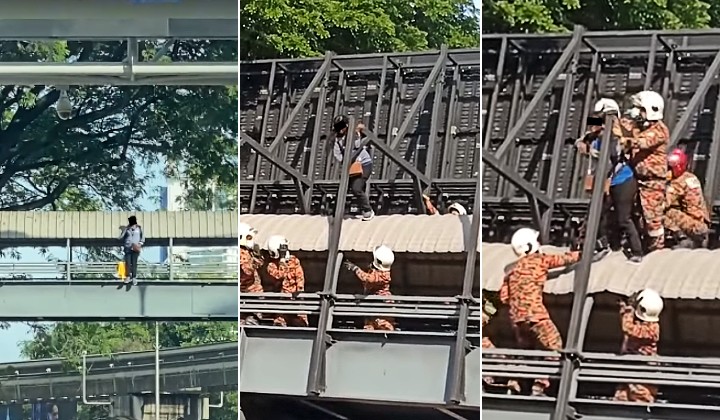 The quick actions of rescue personnel managed to save a woman who attempted to take her own life from on top of a pedestrian bridge near the Jalan Maharajalela monorail station in Kuala Lumpur on Tuesday (11 March) morning.

Videos being shared online captured the daunting sight of the local 39-year-old woman standing on the edge of the bridge, almost 10 meters above the ground and the rush hour traffic that’s passing below her.

Several other clips later showed the Fire and Rescue Department (Bomba) and other law enforcement authorities at the scene attempting to persuade the woman from her actions.

Footage showed rescuers having to wrestle the lady off the bridge as several other men waited below with a large safety net (just in case) to cushion her fall.

23 personnel from the Hang Tuah and Pudu Bomba stations were sent to the woman’s rescue. The woman was also said to be carrying a knife at the time and had threatened to slit her own throat when rescuers tried to first approach her.

Fortunately, she was removed from the bridge unharmed and is now safe in police custody.

Read More: Malaysia Punishes Suicide To Deter People From It, But Did We Succeed?

The 2019 National Health and Morbidity Survey (NHMS 2019) revealed that there were more than half a million Malaysians suffering from depression and more than 400,000 children impacted by some form of mental health trigger.

Malaysia also recorded a spike in cases of attempted suicide during the early stages of the Movement Control Order (MCO) period between March and July 2020.

More than 37,000 phone calls also came in from people who are concerned about their mental health on the nation’s Covid-19 hotline reporting incidences of domestic abuse and depression.

If you or anyone you know show signs of mental health problems, please reach out for help or get in touch with the many free mental health resources available in the country.

Or head on over to our list below for details on free mental health clinics and counselling sessions available for English, Bahasa, Chinese, and Tamil speakers.

Read More: Need Help? There Are Free Mental Health Resources For You In Your Preferred Languages