The gunshots left Awang Rasau partially paralysed and the tiger could only drag its hind legs. 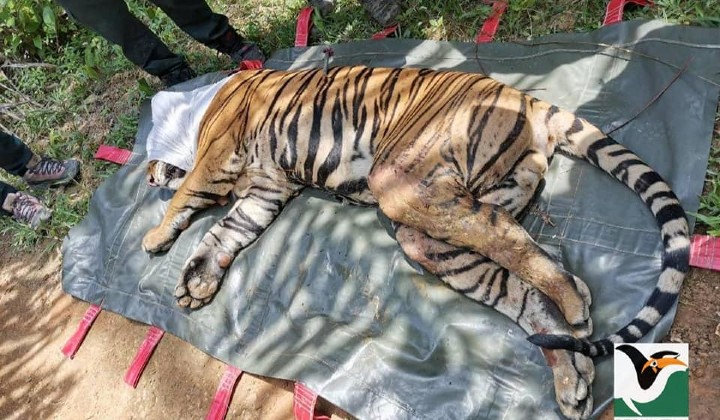 In a Facebook post, PERHILITAN explained that the male tiger named Awang Rasau had died on 5th March at Universiti Putra Malaysia’s Veterinary Hospital due to a combination of nerve complications, digestive system failure and an infected wound on its hind leg.

Shot by poachers with 8 bullets that left him paralysed

The tiger was rescued by PERHILITAN from a FELDA oil plantation in Kemaman Terengganu and it was initially thought that there were only three gunshot wounds on its hind legs.

However, subsequent surgeries and X-rays revealed that more bullets had been fired and embedded into the endangered animal’s body.

The bullets had struck Awang Rasau’s lungs and spine, which left the tiger paralysed.

The 160kg tiger could only move using its front legs and the hind legs suffered further damage as a result of being dragged around as Awang Rasau moved. Rescuers found the tiger exhausted from the injuries it suffered.

Awang Rasau was then brought to the rescue centre in Sungkai, Perak, for treatment and further observation but its health began worsening on 3rd March.

The tragic tale of the Malayan tiger

While the Malayan tiger has long been a national icon, it was only recognised as a distinct species in 2004 when DNA testing revealed that it is in fact a new subspecies of tiger called Panthera tigris jacksoni. Before 2004, the Malayan tiger was classified as the Indochinese tiger.

However, it’s numbers have been rapidly dwindling over the decades. From an estimated 3,000 strong population in the wild in the 1950s, it is now believed that less than 200 of these majestic creatures remain in the wild.

In 2019, Perak State Parks Corporation (PTNPk) estimates that there are only 23 Malayan tigers left in the Royal Belum and Temenggor forest reserve.

Currently, the Malayan tiger is listed as “critically endangered” under the IUCN Red List and faces an extremely high chance of extinction in the wild.