CCTV footage proved that she was alone on an empty street. 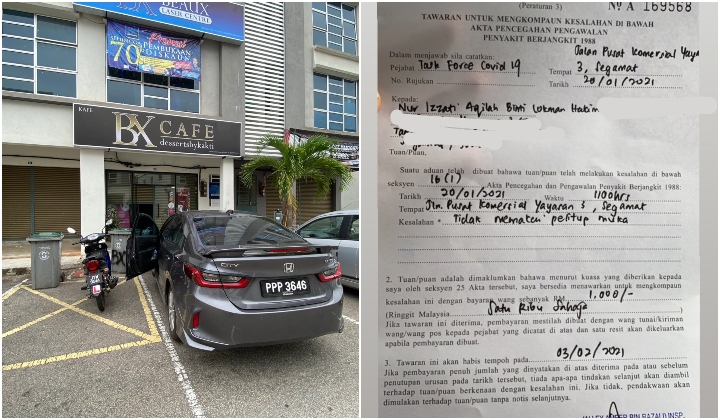 It took weeks of effort and media attention, but the Health Ministry has cancelled the RM1,000 compound issued to a cafe owner in Segamat, Johor for not wearing a facemask out in public, when there was no one else around.

In a joyous tweet on 6th March, Nur Izzati Aqilah Lokman Hakim shared that she had received a call from the Health Ministry who informed her that her compound had been cancelled by the Attorney General Chambers of Malaysia.

The Attorney General Chambers of Malaysia has cancelled the compound so I don’t need to pay. Alhamdulillah. Tq family friends and everyone for your prayers!

Fined for not wearing a mask in an empty street

Nur Izzati’s story was the subject of much debate earlier in January 2021 when the mother was issued a RM 1,000 compound by the police for not wearing a face mask while getting out of her car at an empty parking spot in front of her cafe in Segamat, Johor.

The compound was issued on 20 January 2021 by the Segamat District Police for not wearing a face mask in a public setting during the Movement Control Order (MCO).

She later released CCTV footage of the incident to prove her innocence and sent a personal plea to Johor Police Chief Datuk Ayob Khan Mydin Pitchay to review her charges.

At the time, Ayob Khan had explained in a statement that investigations proved that there were other people around the area at the time she was fined and that Nur Izzati’s claims to dispute the fact were untrue.

She had also stated that her case might already be a lost cause and was presumably no longer pursuing to have her charges removed.

However, after weeks of silence it appears that the outcome is in her favour.

TRP has reached out to Nur Izzati for comments.

READ MORE: Johor Cafe Owner Thinks It Might Be A Lost Cause To Fight RM1,000 Fine For Not Wearing A Face Mask