The cause of the fire was being investigated. 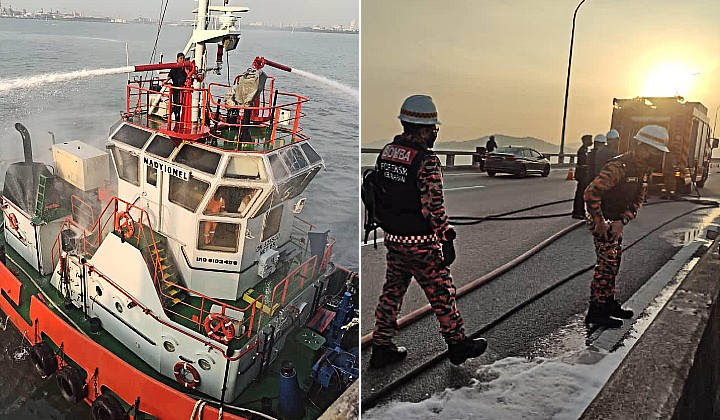 Several lanes on the iconic Penang Bridge may be closed to traffic for up to three months in order to repair electrical cables running under the structure which caught fire twice this week.

Firefighters were rushed to put out two separate flames which occurred under the bridge at kilometre 3.2 at around 4pm Tuesday (22 February) and again at around 9am the following morning (23 February).

Video believed to have been captured by motorists showed black smoke coming from the divider separating the lanes to and from the island as authorities manned the area.

Images shared online later showed Bomba personnel hard at work extinguishing the blaze. Special firefighting boats were also present at the scene to put out the flames which raged under the bridge.

According to Tenaga Nasional Berhad (TNB) the fire had involved a 132-kilovolt power transmission cable running from Bukit Tengah to Bayan Mutiara, damaging three circuits and disrupting power for merely 35 seconds before it was restored.

TNB explained that Penang’s electricity supply remained stable as there are four other submarine electrical cables supplying power to the island.

Though the cause of the incident was still being investigated, TNB said that repairs would be completed within three months.

Penang Bridge IS NOT falling down

Penang Bridge operator, PLUS Malaysia Berhad, assures road users that the bridge remains safe to use, but recommends people to use the Sultan Abdul Halim Muadzam Shah Bridge or the Penang Second Bridge as an alternative to reduce traffic congestion.

A similar electrical cable fire was last reported occurring at the bridge in 1993.