Cantik the cat was also pregnant at the time. 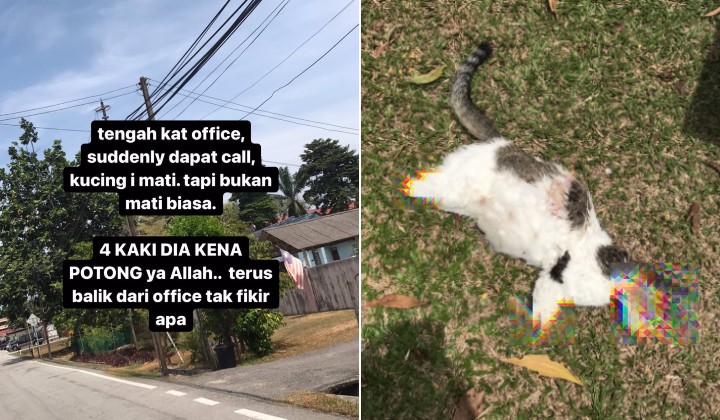 Malaysians were appalled by the tragic death of a pet cat named “Cantik”, its remains left in a box and all four of its paws cruelly dismembered, it is also believed the cat was tortured.

Sharing her sorrows on social media, the cat’s owner Mur Salina Junaidi, had posted videos and images of her feline companion which her family had kept since 2019.

In her Twitter thread, Salina expressed how the family was devastated by the loss of her furry friend and never imagined how such horrors could befall the animal. Cantik was also said to be pregnant with a litter of kittens at the time.

Salina writes how she had rushed home from work after receiving a call from her uncle who found Cantik inside a box which was left outside their home in Kuala Lumpur.

Did you know that she was pregnant? My cat never poops or pee or even hangs out at our neighbour’s house. After you did this, you put her back at my house. What satisfaction did you get out of this, you devil?

Speaking to Harian Metro, Salina said that all she could do was cry when she found her pet in such condition.

From what I can tell, Cantik’s paws were possibly broken or ripped off its body by the culprit, not dismembered by something sharp. What’s heartbreaking is that there was excrement coming out of her showing the pain she endured from being tortured alive.

Cantik’s death was subsequently reported to the police and the Department Of Veterinary Services Malaysia (VSM).

Netizens were seen sharing their grief and condolences to Salina and her family.

This is so heartless. Subhanallah. I cried.. macam mana tergamak siap potong 4 kaki. Allahuakbar.. if this happened to my cats, I would cry my heart out. Ya Allah..

Salina said that she will fight to the end to find the people who did this to her beloved pet.

Meanwhile, Malaysia Animal Association president Arie Dwi Andika has called on the public to come forward with any info on the tragic crime.

We hope that the case gets the attention of the authorities and witnesses can either send information to the police or get in touch with the cat’s owner through Animal Malaysia’s Whatsapp hotline at 01120901097, immediately.