The crash was believed to be related to a missing person case reported in June 2020. 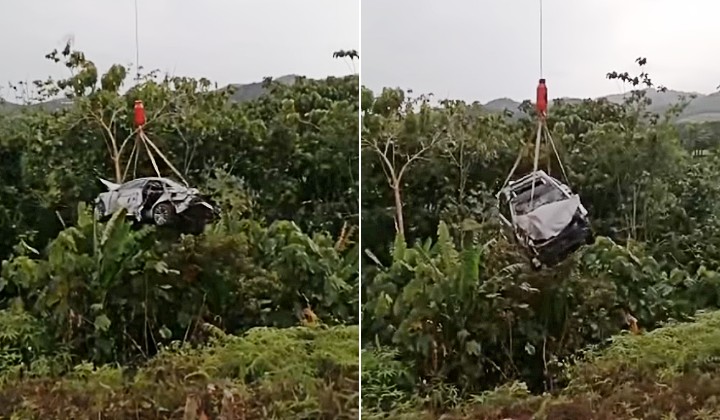 Authorities made a chilling discovery when wreckage and the decomposed remains of a car crash victim were found in a gorge off the North-South Expressway (NSE) on Friday (19 February) afternoon, some 10 months after a suspected accident in Johor.

According to police, the wreckage was found at kilometre 122.4 of the NSE from Yong Peng heading to Pagoh by a highway maintenance crew who were clearing storm drains in the area.

The crashed Hyundai Sonata had settled at the base of the cliff some 67 meters away from the expressway and was apparently hidden from view by bushes. A human skull was found near the vehicle, believed to have been detached from the body.

Police reckon that the accident took place sometime between May and June 2020 and that the driver had lost control of the vehicle and plunged into the ravine.

Footage of the crash site was also shared on social media. Several clips showed investigators on location as the car was lifted out of the gorge by crane.

The identity of the victim remains unknown, but authorities managed to track down the owner of the vehicle who had been called in to assist investigations. It’s believed that the crash may be related to a missing person case reported last June.

The victim’s remains were sent to the Sultan Ismail Hospital’s Pathology Department for further action.

Authorities reminded Malaysians to always take great caution on the road and to always have people informed of your movement and travels to avoid tragic mishaps.