The police attributed their swift action to cooperation from members of the public. 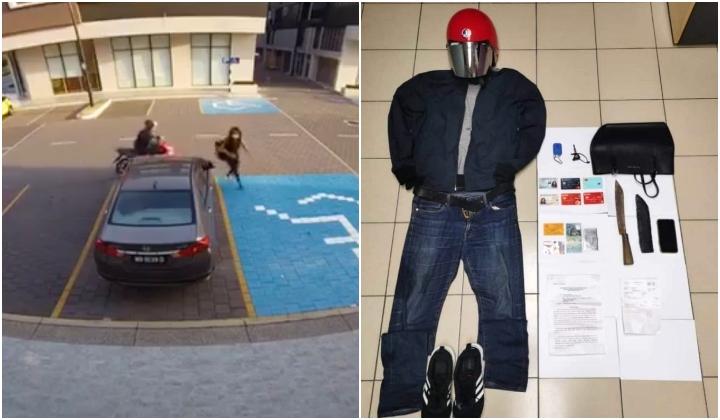 The snatch thief in a recent CCTV viral video who robbed a woman in broad daylight has been caught and detained by the Royal Malaysian Police (PDRM), less than 24 hours after the incident.

According to a report by The Star, Acting Selangor police chief Deputy Commissioner Datuk Arjunaidi Mohamed said the robbery occurred in Telok Panglima Garang, Kuala Langat at around 8.20 am on Tuesday (19 Jan).

Police arrested suspect within 24 hours of the incident

He said the victim was a 51-year-old woman who has since lodged a report of the incident at the Telok Panglima Garang police station.

Through intelligence-based investigation and a tip-off from members of the public, a team from the Selangor CID Serious Crimes Division (D9) managed to successfully track down the 25-year-old suspect.

The suspect was arrested at about 4 pm in Shah Alam on the same day, and has since been detained in connection with the incident.

The police also seized several items during the arrest, believed to belong to the victim.

DCP Arjunaidi also thanked the public for their cooperation in leading the police to the suspect, adding that he hopes such cooperation can continue in the future.

Woman pleads with her aggressor in viral video

In the 1-minute-35-second video, a woman can be seen carrying a large bag and locking her car before crossing the street. As she does this, a man on a motorcycle rides past her.

As the woman crosses the street, the man makes a u-turn and rides directly towards her before taking out a parang and threatening her with it.

The woman evades him and starts running away from him on foot as he chases her on his motorcycle. She screams for help while pleading with her aggressor, telling him that she has no valuables.

The man eventually manages to corner the woman and yanks her large bag, resulting in her falling down. He then quickly grabs her phone and leaves on his motorcycle.

Members of the public who heard her cries come out to help her but are too late, and the man manages to escape.