The wreck is thought to be a British ship from the 1800s. 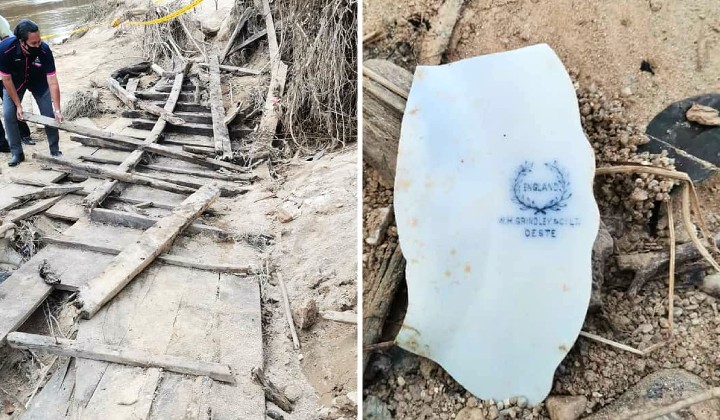 When the floodwaters in Pahang receded almost 220km, it left behind a historical treasure: the hull of an old ship, made of wood and copper.

National Heritage Department (JWN) director-general Mesran Mohd Yusop said the ship was most likely a British-owned merchant ship or used by dignitaries of that period.

Fragments of ceremic goods were found, together with metal plates inscribed with the words ‘Vivian & Son’ and the year 1842.

Vivian & Son were a copper smelting house established in 1809 that reached its peak in 1920. Later on, it merged with the British Copper Manufacturers Limited in 1924. Two years later, the company was taken over by Yorkshire Imperial Metals.

However, Mesran noted that the National Heritage Department were not the first ones to have found the shipwreck.

They found evidence that the shipwreck has been tampered with, as items such as nails and copper-coated ship walls were missing.

Later on, a scrap goods company returned around 100kg of items under advice by the police, which they claim have been sold to them.

The National Heritage Department has asked the public to return anything they may have scavenged from the shipwreck, as these items and goods are under the jurisdiction of the department.

The ship’s hull and its accompanying historical artefacts will be salvaged and transferred to the Kuala Lipis Heritage Museum, while the police will maintain surveillance at the location to prevent further theft or intrusion.