No elections, state or federal, will be held until the pandemic is under control. 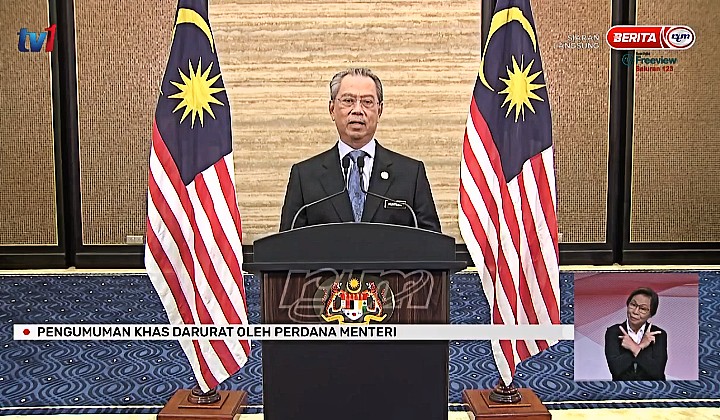 The Emergency is not a military coup and no curfew will be enforced from now until 1 August, said Prime Minister Tan Sri Muhyiddin Yassin who added that the civil government will run as usual.

He said the number of cases in the country are on the rise with no signs of slowing down, which prompted the government to advise the Agong to declare the Emergency.

Although the Emergency has been announced, Muhyiddin said economic activity will continue to function throughout the period, subject to SOP compliance and Bursa Malaysia, the Securities Commission will continue to play a role as a market facilitator

READ MORE: What Is This State of Emergency/Darurat Thing Anyways?

The Agong can also decree, based on circumstances, ordinances to stop the spread of Covid-19, such as:

He added that the GE will be held as soon as the Independent Committee certifies that Covid-19 has subsided or fully recovered.

READ MORE: Malaysia Went Into Emergency Twice Before & It Was NOT Pretty

The Independent Committee will also advise the Agong whether to extend or shorten the Emergency.

Earlier today, the Yang di-Pertuan Agong Al-Sultan Abdullah Ri’ayatuddin Al-Mustafa Billah Shah has assented to declaring a State of Emergency across Malaysia that will last till August 1 but could end earlier based on the advice of an Independent Committee of Parliamentarians and relevant health experts.

Malaysia will again be going under lockdown for two weeks starting 12.01am on Wednesday (13 January) in order to curb the spread of Covid-19 which has reached record numbers in the past few days.