DAP had previously criticised the PAS-led Kelantan state government for the same move. 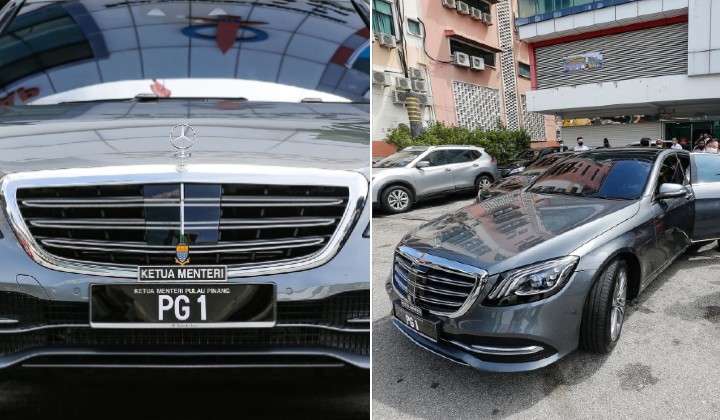 Penang Chief Minister Chow Kon Yeow’s new ride was welcomed with criticism from pretty much everyone.

The RM458,000 selenite-grey, Mercedes-Benz S560e luxury hybrid saloon, was bought by the state to replace the Chief’s old official car – a Mercedes S300L purchased for and used by the former Penang CM Lim Guan Eng since 2013 and cost RM298,263.

Not the best time?

Many began questioning the State Government’s decision to get the new car considering how loud members of the Opposition were at condemning the Kelantan State Government for its purchase of luxury vehicles, which made headlines in 2020.

Former Youth and Sports Minister Syed Saddiq Syed Abdul Rahman took to social media and openly compared the Penang State government with Kelantan’s and added that the rakyat was fed-up by the extravagance shown by “VIPs” – with their fancy imported cars, luxurious meals and events.

The rakyat are struggling, sick and hungry. The Covid-19 crisis, the flood crisis. There are those who slept for over 8 months in their car because they couldn’t afford rent. There are those who drowned due to collapsing from exhaustion helping kampung residents because of floods.

Terengganu PKR Youth Chief Nazhan Zulkifli was also reported as saying that such behaviour would make the rakyat sick of politicians and said that the Penang government owes the people an apology.

We do not want to be an opposition that only knows to attack the other side, but at the end of the day, we do things just like them. This is akin to a crab trying to teach its offspring how to walk straight.

Of course former Prime Minister Datuk Seri Najib Razak also took a shot at DAP, saying that the party would only be “furious” when the Kelantan PAS government made such purchases.

On social media, netizens were also voicing their dissatisfaction over the issue saying that it was a waste of taxpayer money.

No, I do not agree with the Penang CM's purchase of the RM420k Mercedes-Benz while others are suffering.

There is no necessity to buy a luxury car using the people's money when hundreds of thousands have lost jobs due to Covid-19 and thousands are affected by bad flooding.

Some even took to comparing how members of the Opposition were critical on other accounts of luxurious spending but remain silent in light of the current situation.

Still no respond from some DAP leaders such as Hannah Yeoh, Marina Ibrahims and etc on this Penang Chief Minister’s new rm400k++ Mercedes during such a disastrous pandemic. where have they gone?

They can condemn others, but why keep silent on one of theirs? pic.twitter.com/lkRWP8EUZs

Penang has reportedly been upgrading its fleet of state official vehicles since 2019, explaining that new cars would be safer and cost less on maintenance.

In 2020, the Kelantan State Government purchased 14 Mercedes-Benz for the use of state officials with Kelantan Menteri Besar Datuk Mohd Amar Nik Abdullah reported as saying that it was also due to safety reasons.

However that same year, Guan Eng who was Malaysian Finance Minister at the time, announced that the Federal Government would keep using the Malaysian-made Proton Perdana as its official car after it was reported that the government intended to replace its fleet of official vehicles with imported cars.