Authorities previously believed there were grounds for the factory’s closure. 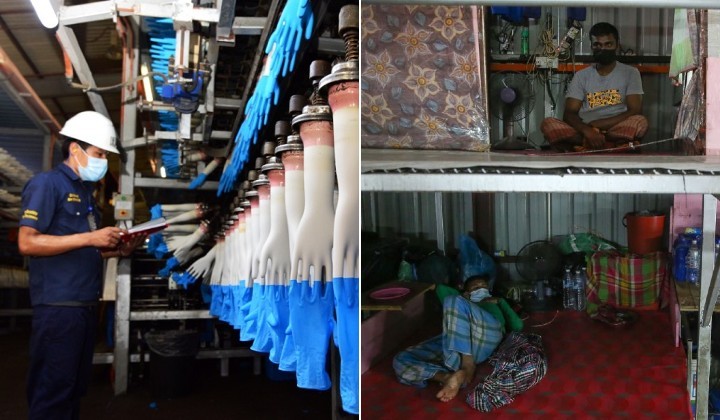 A glove making plant was given a RM1,000 slap on the wrist for failing to comply with Covid-19 preventive measures in their dormitories for workers, based on repots by The Star.

Previously, the factory, which is in Port Klang, was raided by authorities on Thursday 24 December with the possibility of a shutdown for seven days.

Based on their investigation, the Port Klang Labour Department and Klang Health Department found that there were no records of sanitisation and disinfection – which was supposed to be carried out at least three times a day.

When we visited the male hostel, we found one room where physical distancing was flouted. Yes, they did the markings, the ‘X’ sign is there, but it was not being practised in reality, and they could not prove themselves with just one record from the factory operator. Those are indeed offences which we can compound.

Authorities explained that there was “potential” for the factory to be shut down if investigations show that the facility had violated more than three rules under the Prevention and Control of Infectious Diseases Act 1988.

They also found that the factory did not comply with several rules under the Workers’ Minimum Standards of Housing and Amenities Act (Act 446) with triple-decker bunk beds which are considered a risk to workers.

It’s reported that almost all the bunks did not have mattresses, pillows or blankets and images released by the media show that workers were living in supposedly cramped conditions.

Peninsular Malaysia Labour Department deputy director-general Mohd Asri Abdul Wahab said that one of the dorms was also built into an existing factory which requires a certificate of accommodation from the Klang Municipal Council.

The Star quoted the spokesperson of the company, who is also the factory owner’s son, as saying there’s room for improvement but he has never heard complaints from the workers because their dorms are considered better than dorms in other places.

In November, the Health Ministry (MOH) revealed that a majority of Covid-19 cases in Selangor had originated from another local glovemaker which reportedly had over 5,000 infections among its workers.

Human Resources Minister Datuk Seri M. Saravanan had also acknowledged that the majority of foreign workers in Malaysia were living under terrible conditions.

READ MORE: More Than 90% Of Foreign Workers in Malaysia Live In Squalid Conditions

Live Life A Thousand Times Better By Making Your Own Luck