Is there a lesson to be learned here? 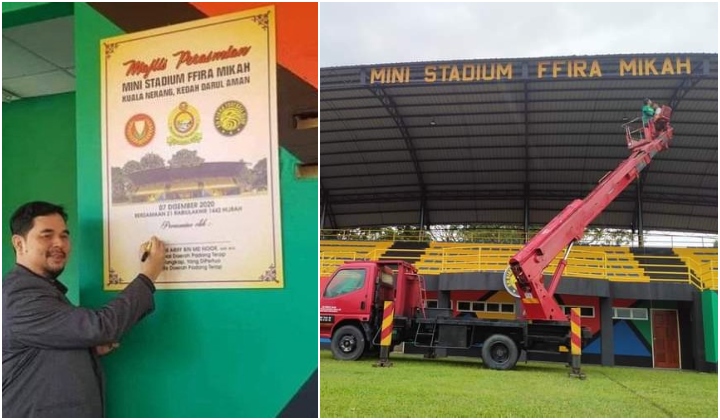 In case you (like me) were too busy over the weekend to focus on Twitter, here’s a quick rundown of the series of events that make up this unusual incident to catch you up to speed.

According to news reports of the incident, it is understood that the mini stadium, located in Kuala Nerang in the Padang Terap district of Kedah, was recently fixed and upgraded before being reofficiated and renamed by Hakim Ariff on 7 December.

During an exclusive interview with Sinar Harian, Hakim revealed that his team aimed to inject new spirit into the stadium by selecting a unique name that could attract attention.

Hakim said had applied for an allocation of RM200,000 from the state government to upgrade the stadium which had formerly been in a dilapidated state.

Someone shares the incident on social media

Photos and videos of the officiating ceremony, together with a sign of its new name, gets posted on social media.

Within a few hours, a few bright Malaysians noticed that the stadium’s name, while definitely strange, also felt oddly familiar.

It’s undeniable that the stadium’s name, Ffira Mikah, is Hakim Ariff’s name spelled backwards, down to the double ‘f’s.

While the media continued to dig for more information on the matter, the ensuing response from Malaysians online was too overwhelming for the Kedah state government to ignore.

READ MORE: Kedah District Official Catches Flak Online For Having A Mini Stadium Named After Himself

Remember that exclusive interview with Sinar Harian we mentioned in the first section? During the same interview, Hakim Ariff gets asked about the stadium’s name, and he denies that it was named after him.

He says that not only does the name “Ffira Mikah” have nothing to do with his name, he cites pure coincidence for the fact that spelling “Ffira Mikah” backwards forms his name “Hakim Ariff”.

Instead, he claims that the name Ffira Mikah has a meaning “in Spanish or Greek” and in Arabic, adding that this was the reason why it was nominated to be used to rename the stadium during an administrative meeting.

According to Hakim, Ffira means “something great” in Spanish or Greek, while Mikah is the name of an angel in Arabic.

I did a quick Google search to verify this. What I found was that as Spanish and Greek are languages that have different origins (Spanish comes from Latin, and Greek…well, from Greek), the two languages can’t be used interchangeably.

Besides that, according to Google Translate, Fira in Spanish means fair, and Fira in Greek refers to the capital of Santorini, which is derived from the word Thíra, which is the ancient name of the island itself.

Searching for Ffira didn’t give me any significant results.

Meanwhile, searching for Mikah in Arabic gave me results for the Arabic name Mica which means “cool, sweet, and intelligent”.

But then, this still doesn’t explain why they went with “Ffira Mikah”, and not Fira Mica.

The sign comes down, and the name gets changed

The sign of the stadium’s name was removed today, and the stadium is expected to be renamed as the Kuala Nerang Mini Stadium.

Chairman of the Kedah State Health and Local Government Committee, Datuk Dr Mohd Hayati Othman revealed to Berita Harian that they weren’t aware that the mini-stadium had been given such a strange name and was only tipped off after it went viral.

I was surprised when I found out the (new) name, we were not informed on the proposed name as it was under the jurisdiction of the Padang Terap district council (PTDC).

He said such names shouldnt be used for public property as people may have a negative perception.

Instead, the local government has been advised to use names of historical figures in the district, or the names of individuals who had contributed to replace the current name.

While we aren’t sure what this incident can teach us, it was pretty funny to see him bravely double down on what was probably his version of a lawak hambar (lame joke).