Her father is from Alor Setar, Kedah! 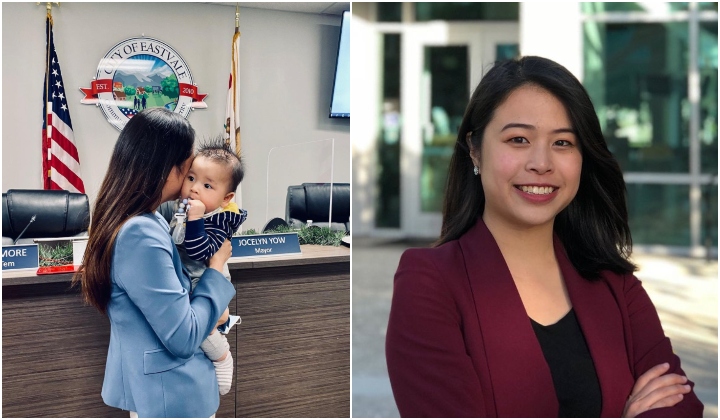 While women politicians here in Malaysia struggle to be heard, one woman of Malaysian heritage has made history by being the youngest woman of colour to serve as a mayor in California, United States.

Jocelyn Yow is a 25-year-old woman of Chinese Malaysian and Vietnamese descent who was born in the United States.

Mayor Yow is a shining example of what can happen when women – especially women of colour – are provided opportunities to run and win political office.

Although Jocelyn was born in the US, and therefore a US citizen by birthright, she returned to Malaysia with her family while she was still a baby.

Her father had gone to the US in the 1980s to further his studies in engineering at the University of Arizona. While he was there, he met Jocelyn’s Vietnamese mother, who had arrived in the US with her family as refugees.

The two of them settled in San Jose, California, which is also where Jocelyn was born.

In 1996, when Jocelyn was just a year old, her family moved back to Malaysia after her paternal grandfather was diagnosed with cancer.

She lived and grew up in Kedah for a decade, studying at SMJK Keat Hwa in Alor Setar, according to Malaysiakini.

Then, in 2011 when Jocelyn was 16 years old, she returned to the US with her brother to attend college, just like her dad. Her parents followed suit a few years later to settle down in Eastvale.

Jocelyn, who studied at Norco College and the University of California, Berkeley, is now pursuing a master’s degree in government at Harvard Extension School.

Besides being Mayor of Eastvale, she is also currently the policy manager for IGNITE, a national nonprofit to elect more women to positions of power.

Last but not least, Jocelyn recently became a new mum when she gave birth to her son six months ago. Is there anything this woman can’t do?

Being a new mom to a 6-month-old further fuels my passion to serve my community, Local government makes decision that affect our daily lives and is where we can directly see democracy in action.

Eastvale Councilwoman Jocelyn was officially sworn in on 10 December as the mayor of Eastvale in Riverside County, a town located an hour east of Los Angeles, California with a population of over 55,000 residents.

Her appointment was a historical one as she is the youngest woman of colour to ever serve as a mayor of a Californian city.

She was elected to the Eastvale City Council back in 2018 becoming the first Malaysian-American elected to public office in the US and served as mayor pro-tem before becoming mayor this year.

While only 25-years-old, she has worked as a district representative for California State Senate and as an aide for the US House of Representatives where she tirelessly helped seniors, families, small businesses, nonprofit organisations, and children, access valuable government services.

When she held her newborn son, Kayden, in front of her nameplate, which now reads “Jocelyn Yow – Mayor” she shed tears of happiness over her hard-earned achievements.

An advocate for female representation in politics

Despite not having much to their names while she was young, Jocelyn says that her parents always emphasized the importance of public service and giving back to the community.

Today, she is an advocate for more female representation in politics and is constantly speaking out about the tribulations faced by working mothers everywhere.

The first thing on her agenda as the new mayor is to create Eastvale’s first public library.

We wish Jocelyn all the best in her endeavours as a US politician and are looking forward to seeing her rise to even greater heights and smash more glass ceilings!