She has held various positions in both local and foreign governments. 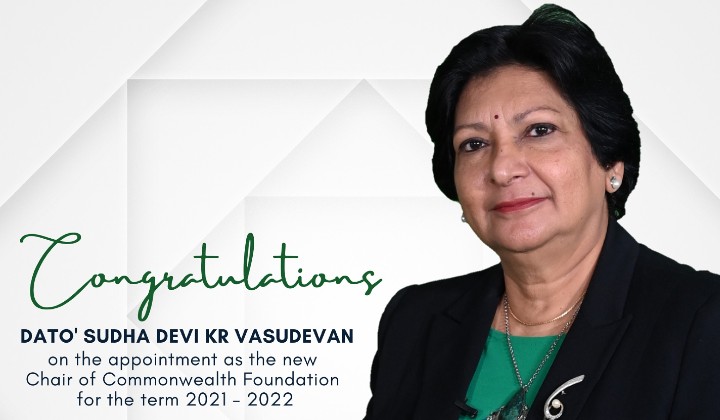 Datuk Sudha Devi has been appointed as the Chair of the Commonwealth Foundation – making her the first Malaysian and also the first Chair from the Asian region since the Foundation’s establishment in 1996 – for a two-year term starting 1 January 2021.

Based on the release by Wisma Putra, Sudha came out on top against candidates from Camaroon, Kenya and Papua New Guinea.

As part of her role, she will preside over Board of Governors’ meetings, represent the Foundation in international meetings and events; and serve the role as an ambassador to the organisation.

Previously, she was Malaysia’s High Commissioner to Australia and an Ambassador of Malaysia to Federative Republic of Brazil.

Sudha has also served in various diplomatic positions in Germany, Singapore and Switzerland.

Locally, she held various positions in the Foreign Affairs Ministry, including as the Director-General of the Department of Policy Planning and Coordination, undersecretary for the East Asia Division and Deputy-General for the ASEAN-Malaysia National Secretariat.

The Commonwealth Foundation is a Commonwealth agency for civil society that’s dedicated to strengthening people’s participation in all aspects of public dialogue.

Ultimately, the Foundation seeks to ensure that policy and government institutions are more effective contributors to the development through the influence of civic voices.

Congratulations Datuk Sudha Devi for your fine achievement, we as Malaysians are proud that you’ve gone to such great heights.