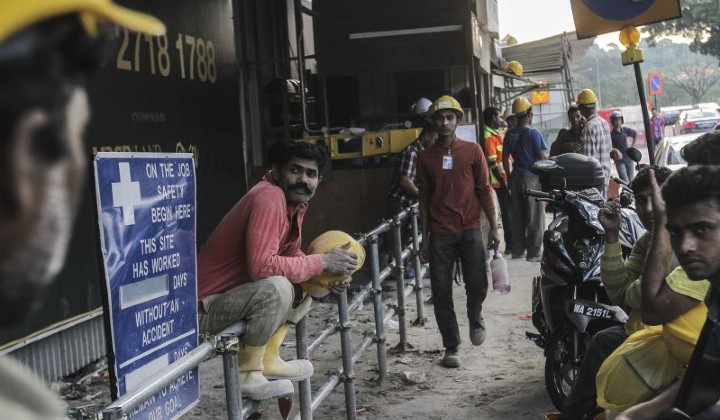 Almost all foreign workers in Malaysia are housed in accommodations that doesn’t comply in the Workers’ Minimum Standards of Housing and Amenities Act 1990 or Act 446, based on reports by Malay Mail.

Human Resources Minister Datuk Seri M. Saravanan said that the government received application for Certificate of Accommodation for only 143,587 or 8.89% of the total as of 31 October.

He said said the data is “very worrying”, considering the current Covid-19 pandemic.

This situation clearly shows that employers and providers of centralised accommodation for 1.4 million foreign workers in Malaysia still fail to apply for the certificate from the Department of Manpower Peninsular Malaysia (JTKSM).

Saravanan said the enforcement of Act 446 (Workers’ Minimum Standards Of Housing And Amenities Act 1990) would be carried out with action taken against employers failing to comply.

He said since enforcement of Act 446 last September, the Department of Labour Peninsular Malaysia (JTKSM) has conducted 1,850 inspections.

It involves 1,813 employers and 37 centralised accommodation providers in the Peninsula and the Federal Territory of Labuan.

It’s also reported that Senior Minister (Security) Datuk Seri Ismail Sabri Yaakob, who was present at the same press conference, also commented on the issue, saying that employers need to have the Certificate of Accommodation staring 1 July 2021.

Before the employer makes an application to bring in foreign workers, he said, they must first obtain the certificate from the Ministry of Human Resources.

Ismail Sabri, who is also the Chairman of the Cabinet Committee on Foreign Workers also reminded employers that the Act is also applicable for local workers, not just foreign ones and added that attention is being given to Act 446 due to a high number of Covid-19 cases involving foreign nationals.