Recreational cannabis use and possession without a license or medical prescription is still illegal. 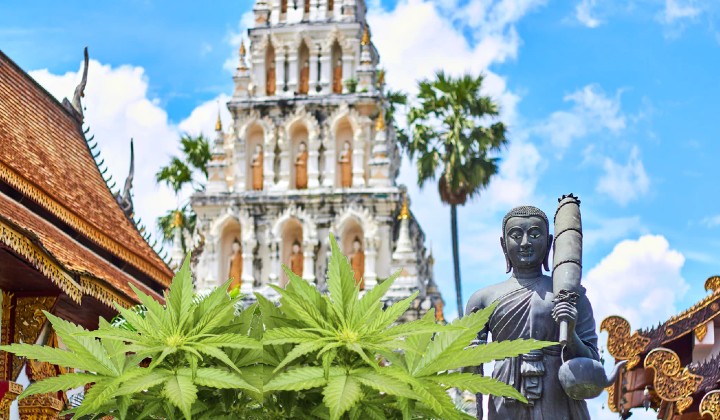 Thailand has removed cannabis – more commonly known as marijuana or ganja – from its list of narcotic substances.

The substance would no longer be classified as a Category-5 drug under the country’s Narcotics Act and would soon allow for the legal cultivation and production of cannabis-based products in the country.

In 2019, Thailand became the first Southeast Asian nation to legalise cannabis for medical use. The country had also recently decriminalized over 100 Category-2 drugs that include substances like opium, cocaine and morphine for medical and research purposes.

Reportedly, “cannabis clinics” have opened up across the country with physicians and pharmacists now legally prescribing medical marijuana to treat ailments, and the Thai government has also been promoting the plant as a cash crop for farmers in its agricultural sector.

However, recreational use and possession of cannabis is still illegal in Thailand – meaning that without a permit or a doctor’s prescription, being caught with marijuana can still result in heavy fines and prison time.

Cash is green too

More and more countries have or are eyeing to legalize marijuana. According to a 2020 market research report, the global legal cannabis market is expected to be worth over RM299 billion by 2027.

Here at home, marijuana and cannabis-based products are still illegal regardless if it’s used for medicinal purposes or otherwise, where possession of the substance can land you heavy fines, imprisonment and lashes of the cane.

According to the National Anti-Drug Agency (NADA), cannabis accounts for 3.9% of the illegal drug offences here in Malaysia with some 700 marijuana use cases reported as of 2019.

But, the nation has also stated interest in capitalizing on cannabis for the economy. Selangor lawmaker Mohd Shaid Rosli once suggested that Malaysia could become the largest producers of cannabis in the region. Malaysia’s Dangerous Drugs Act 1952 also already allows for the growing of cannabis for medical purposes with strict rules and oversight by the government.

Meanwhile, a proposal to decriminalise drug possession and personal use for cannabis and other scheduled substances have also been pushed forward in Parliament to classify drug abuse as a public health issue rather than a criminal problem.

Drug decriminalisation will indeed be a critical next step towards achieving a rational drug policy that puts science and public health before punishment and incarceration. An addict shall be treated as a patient (not as a criminal), whose addiction is a disease we will like to cure.